Debunking the Dursleys: They Were Always Awful

You may have seen the fan theory floating around the internet that attempts to excuse the Dursleys from their horrid behavior towards Harry by reasoning that they were under the influence of a Horcrux, in Harry himself. Most fans accept things like this as head-canon at face value, but one has to read no further than the first chapter of the first book to prove this false. The Dursleys were always just horrible people.

Harry’s seven-book saga begins on a Tuesday with cloudy skies, with a chapter titled “The Boy Who Lived”. By the time the story starts, the Dursleys already despise the Potters. Their greatest fear in the entire world is that anyone will find out that they have anything to do with the Potter family at all. The book reads of the Dursleys, “They didn’t think they could bear it if anyone found out about the Potters. Mrs. Potter was Mrs. Dursleys sister, but they hadn’t met for several years; in fact, Mrs. Dursley pretended she didn’t have a sister, because her sister and her good-for-nothing husband were as unDursleyish as it was possible to be. The Dursleys shuddered to think what the neighbors would say if the Potters arrived in the street.” Lily and James Potter had been well aware that the Dursleys felt this way, and they had an understood agreement not to interact with one another whatsoever. The book states as Vernon Dursley drifts off to dreamland, “His last, comforting thought before he fell asleep was that even if the Potters were involved, there was no reason for them to come near him and Mrs. Dursley. The Potters knew very well what he and Petunia thought about them and their kind.”

Their kind. The first chapter of the book never even elaborates on what their “kind” is. All that is ever made clear to us is that they are different, and as such are obviously to be hated. The Dursley family despised anything strange, whether it was magical or otherwise. The words “magic” or “witch” or “wizard” are all very deliberately avoided and never used in Chapter One. In fact, such magical terms are actually avoided all the way until Chapter Four in “Keeper of the Keys” where the famous “You’re a wizard, Harry” bombshell drops. (One exception is the Potter-universe-specific term “Muggle”, which makes its first appearance in chapter one.) Obviously, the book still dips our toes into the waters of the wizarding world before then; 10 witches or wizards are mentioned by name in chapter one. Including, in order of first mention: Lily Potter, Harry Potter, Voldemort, Albus Dumbledore, Professor McGonagall, Dedalus Diggle, Madam Pomfrey, James Potter, Hagrid, and Sirius Black. Sirius is mentioned because he is the owner of the famous flying motorcycle that Hagrid borrows to transport Harry. Also, chapter one builds an air of mysterious happenings ranging from shooting stars and owls flying in plain daylight to less explainable events like cats turning into people and Dumbledore’s put-outer. But generally, as readers, we are formally introduced into the world of magic at the same time as a shocked newly-eleven-year-old Harry Potter. 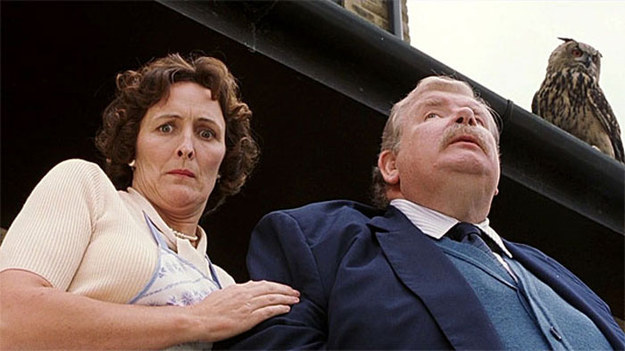 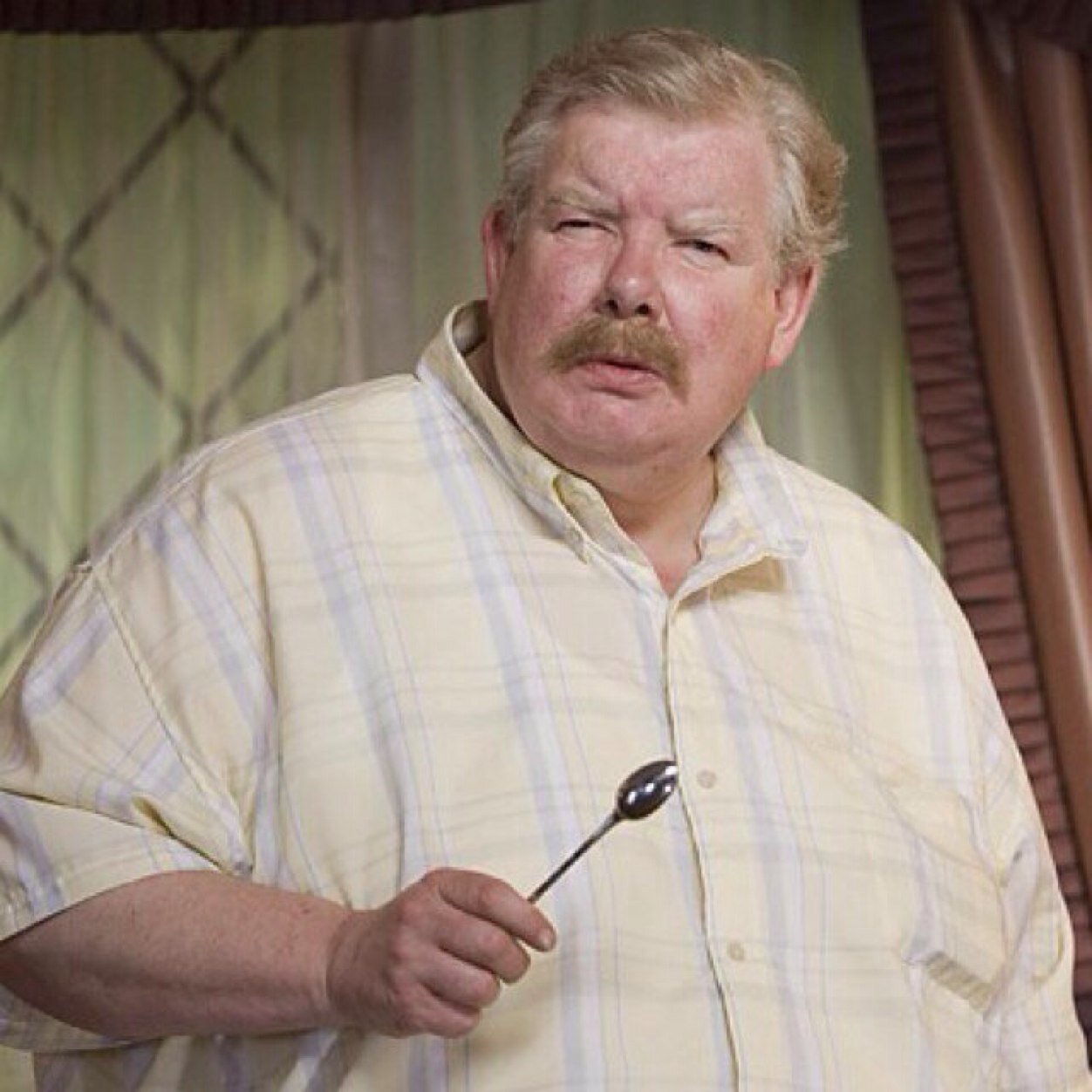 Vernon Dursley, who had morphed into an even more comical caricature of himself in the series of films, was a venomously judgmental and hateful individual in the books. Far more than just being a terrible guardian to Harry, every individual who came into contact with Vernon was in danger of being subjected to the same brutal treatment. Mr. Dursley, director of a drill company called Grunnings, was an abusive man who got joy from screaming at people on the phone. His average workday in his window-office on the ninth floor was described as follows: “He yelled at five different people. He made several important telephone calls and shouted a bit more. He was in a very good mood until lunchtime, when he thought he’d stretch his legs and walk across the road to buy himself a bun from the bakery.” The first chapter of the book also records him screaming at his secretary for something entirely unrelated to her, even though she had done absolutely nothing to deserve it.

Vernon drove to work enraged at the clothes that he saw people wearing on the street. Although others’ clothing had no effect on him, he felt that it needed to be changed to suit his preferences: “As he sat in the usual morning traffic jam, he couldn’t help noticing that there seemed to be a lot of strangely dressed people about. People in cloaks. Mr. Dursley couldn’t bear people who dressed in funny clothes — the getups you saw on young people! He supposed this was some stupid new fashion. He drummed his fingers on the steering wheel and his eyes fell on a huddle of these weirdos standing quite close by. They were whispering excitedly together. Mr. Dursley was enraged to see that a couple of them weren’t young at all; why, that man had to be older than he was, and wearing an emerald-green cloak! The nerve of him!” He was even opposed to the entire concept of imagination: “He hurried to his car and set off for home, hoping he was imagining things, which he had never hoped before, because he didn’t approve of imagination.” 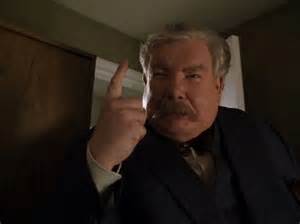 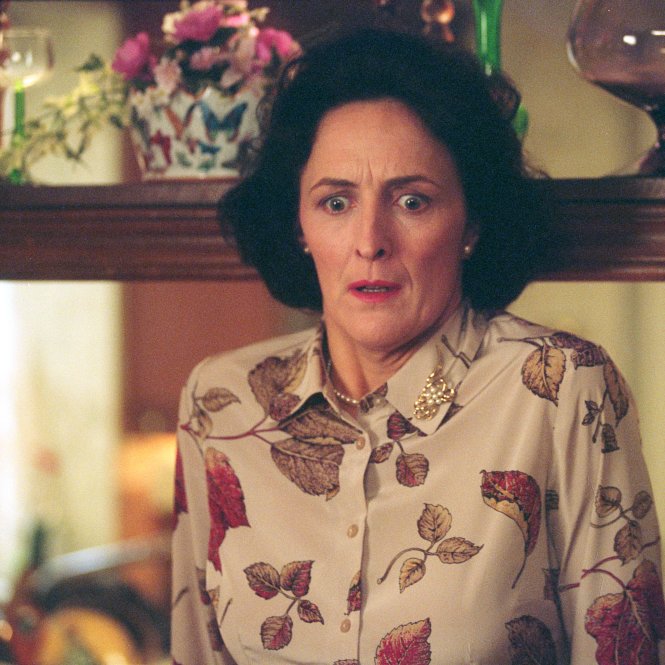 Vernon Dursley did not have the market cornered on unwarranted judgment of others, however. Vernon, who feared no man in his day-to-day life, was terrified of bringing up the Potters to his wife: “It was no good. He’d have to say something to her. He cleared his throat nervously. ‘Er — Petunia, dear — you haven’t heard from your sister lately, have you?’ As he had expected, Mrs. Dursley looked shocked and angry. After all, they normally pretended she didn’t have a sister. ‘No,’ she said sharply. ‘Why?’ ‘Funny stuff on the news,’ Mr. Dursley mumbled. ‘Owls…shooting stars…and there were a lot of funny-looking people in town today…’ ‘So?’ snapped Mrs. Dursley. ‘Well, I just thought… maybe…it was something to do with…you know…her crowd.’ Mrs. Dursley sipped her tea through pursed lips.”

Petunia even hates the sound of Harry’s name: “Mr. Dursley wondered whether he dared tell her he’d heard the name ‘Potter.’ He decided he didn’t dare. Instead he said, as casually as he could, ‘Their son — he’d be about Dudley’s age now, wouldn’t he?’ ‘I suppose so,’ said Mrs. Dursley stiffly. ‘What’s his name again? Howard, isn’t it?’ ‘Harry. Nasty, common name, if you ask me.’ ‘Oh, yes,’ said Mr. Dursley, his heart sinking horribly. ‘Yes, I quite agree.’” Here, we see the Dursley’s already ridiculing Harry, although they had never even met the baby boy. 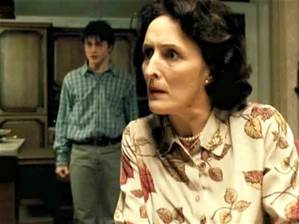 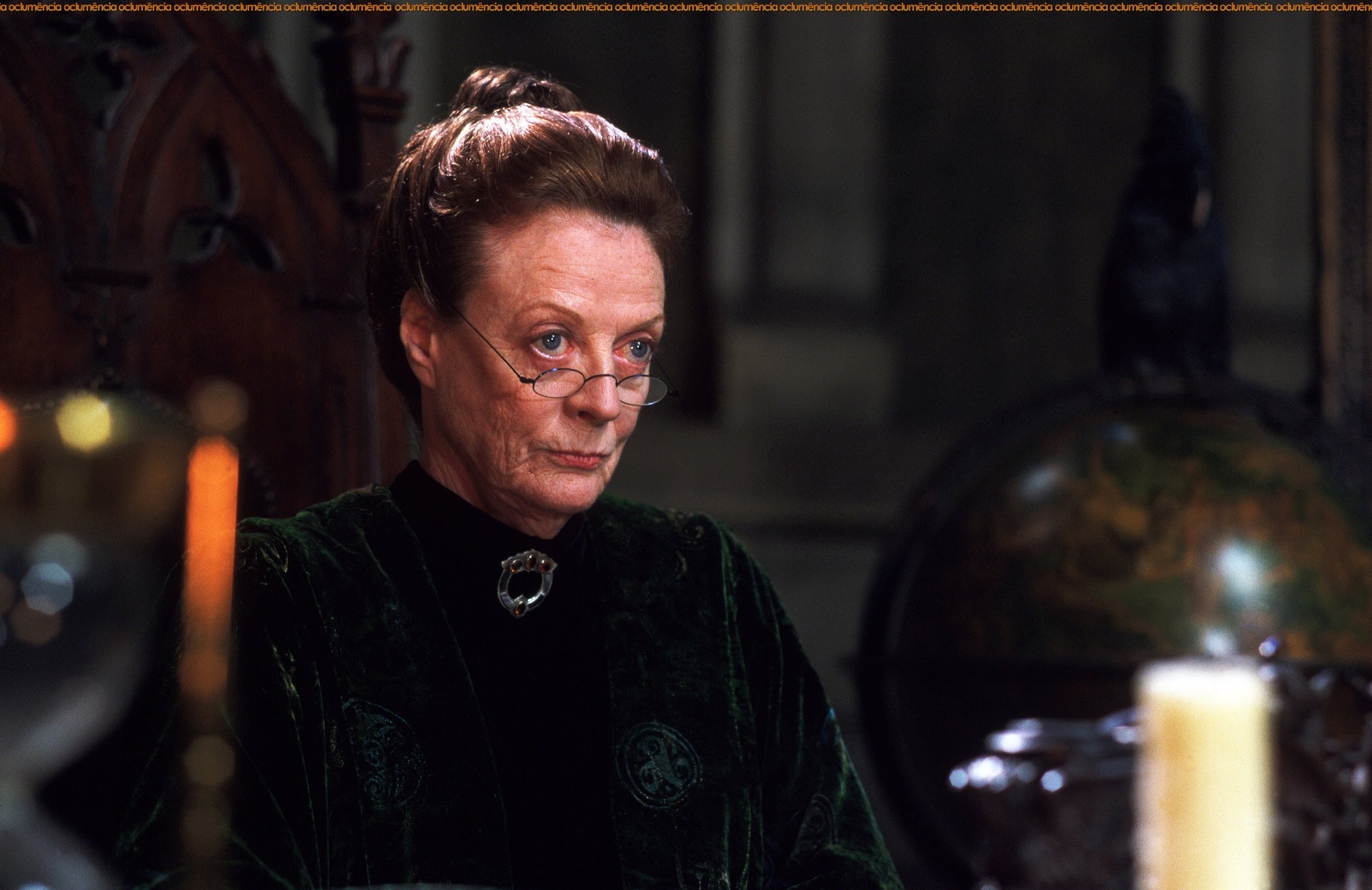 The first witch or wizard to appear in the book is Minerva McGonagall, and apt as ever, she might have known better than Dumbledore on this one. After sitting on Privet Drive watching the Dursley’s in the form of a cat, when Dumbledore reveals his plan to leave the young Harry with his only remaining family, Professor McGonagall jumped to her feet and pointed at number four, “You don’t mean — you can’t mean the people who live here? Dumbledore — you can’t. I’ve been watching them all day. You couldn’t find two people who are less like us. And they’ve got this son — I saw him kicking his mother all the way up the street, screaming for sweets. Harry Potter come and live here!” McGonagall only had to watch them for a couple of hours to have them accurately pegged as a despicable group, incapable of housing the infant Potter.

Part of Minerva’s reasoning for why Harry couldn’t live with the Dursley’s was because of the child Dudley, who had been seen kicking his mother and screaming. By the time we meet the infant Dudley, he is already elementally the Dudley that we see throughout the rest of the books. He is a spoiled brat and a bully. And his parents condone this behavior. In fact, the first words spoken aloud by any character in the series are, “Little tyke,” chortled by Vernon Dursley in response to a baby Dudley throwing cereal at the walls. Those words, “little tyke” are also spoken by Vernon in the next chapter when he praises Dudley for screaming when he felt that thirty-seven presents weren’t enough. “’Little tyke wants his money’s worth, just like his father. ’Atta boy, Dudley!’ He ruffled Dudley’s hair.” 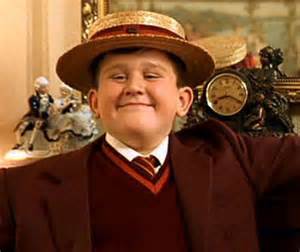 Why does the Dursley family treat everyone around them so poorly? Why do Petunia Dursley and her husband despise members of their own family so much that they refuse to acknowledge the fact that they even exist? Is it because their naturally compassionate and tender natures have been twisted by the dark magic of a piece of Voldemort’s soul? Certainly not. They have acted this way towards the Potters for years. Not only before Harry was a horcrux, but before he was even born. And just as a reminder, for the entirety of the first chapter (which all quotes in this article are drawn from, unless expressly stated otherwise), the Dursleys have never even met Harry. To repeat that, by the end of chapter one, Harry and the Dursleys have still never come into contact: “The Dursley’s knew that the Potters had a small son, too, but they had never even seen him. This boy was another good reason for keeping the Potters away; they didn’t want Dudley mixing with a child like that.” When Petunia Dursley opened the door and saw a swaddled baby there on her step, she literally shrieked aloud. Some credit has to be given to the Dursley’s for keeping the child at all, and perhaps even some of their bad behavior later in life could be attributed to Harry’s influence. But while it may be a factor, it is certainly not the root cause. The rotten foundation was already there. The Dursleys were already gossip-mongers and bullies, custom built to be easy to hate.

The Dursleys are reactionary, prejudiced, narrow-minded, ignorant and bigoted; most of my least favourite things.