Each month Loot Crate offers a choice of boxes (or crates) to their subscribers that allow these fans to get a collection of geek related gear that oftentimes cannot be found anywhere else. Best of all, each month there is an overall theme to the box which is usually published about two weeks prior to each shipment. The theme for this month was “Futuristic” so that means everything that comes in the crate is related to TV shows, anime, games, or movies that talk about the future in some way shape or form. Frankly, this month’s crate is a great one, and one that you will definitely be sorry that you didn’t get. If you are ready, let’s go ahead and step into the Future! 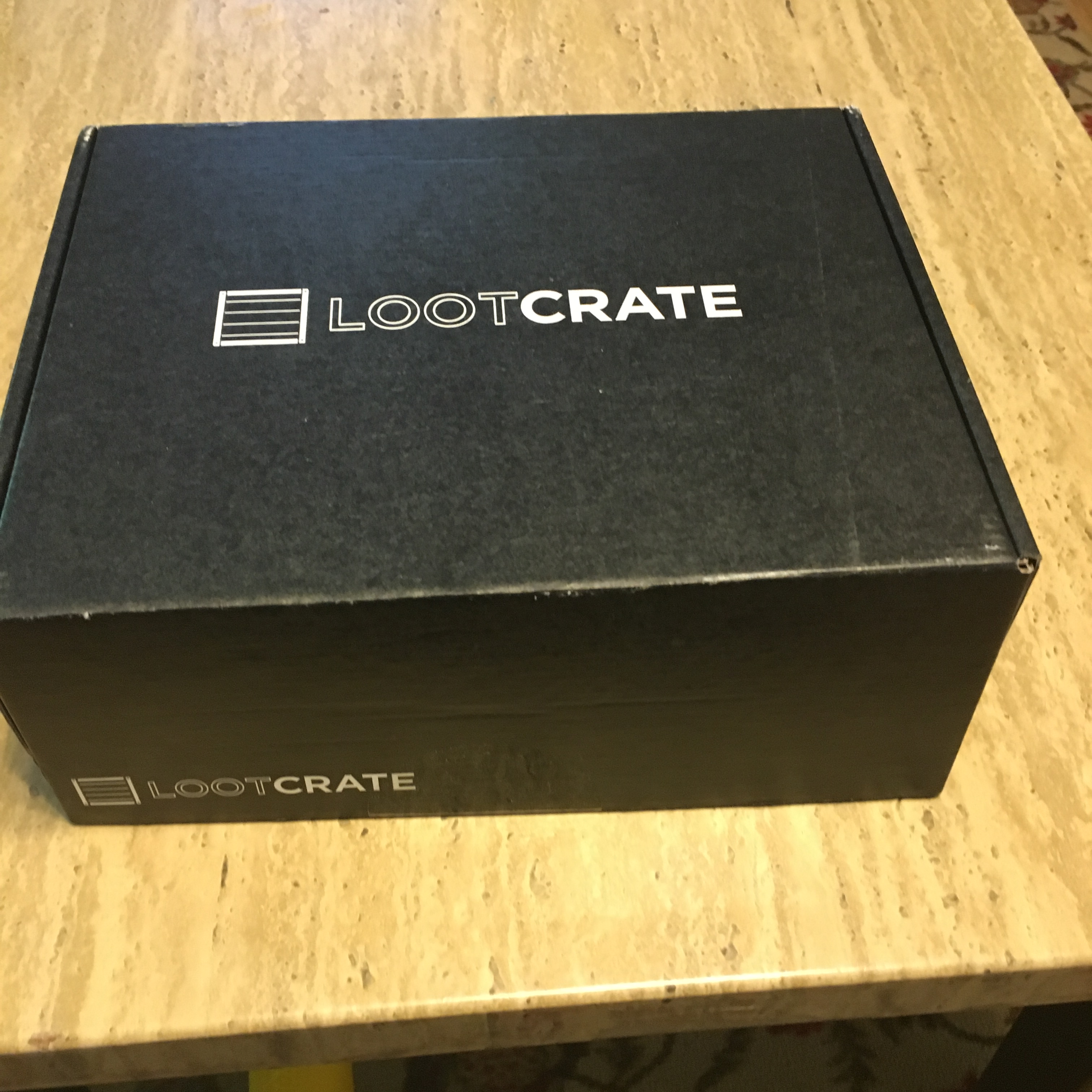 When you receive your basic Loot Crate each month, it comes in a simple black and white protective box. The interior of the box can be used to create a themed diorama that you can use to create fantastic scenes from either your favorite movies, games, animes, or television shows. The box may not look all that large, but each package that you receive will contain at least $50.00 worth of exclusive fan merchandise that you will not be able to receive anywhere else. With a monthly subscription going for as low as $14.00 a month, this is really a fantastic deal. This is particularly true when you consider that there will be several items that are worth at least that price by themselves.

While you can go online and get a rough idea of what your Loot Crate will contain, you will not truly know what will be in the box until you have opened it up. As you open the Futuristic crate, you will see only a few of the items that you have received, but it is enough of a glimpse to make you want to dive in and examine each and every item in more detail. Looking at the now opened box, you will see that you have a t-shirt (as you get each month), a model of the Futurama spaceship, and something that has the Mega Man name on it. What other treasures are hidden under these initial items? Only by digging into this pile of Futuristic themed materials will you be able to see what you have received for your monthly present. This is definitely something to look forward to each and every month. 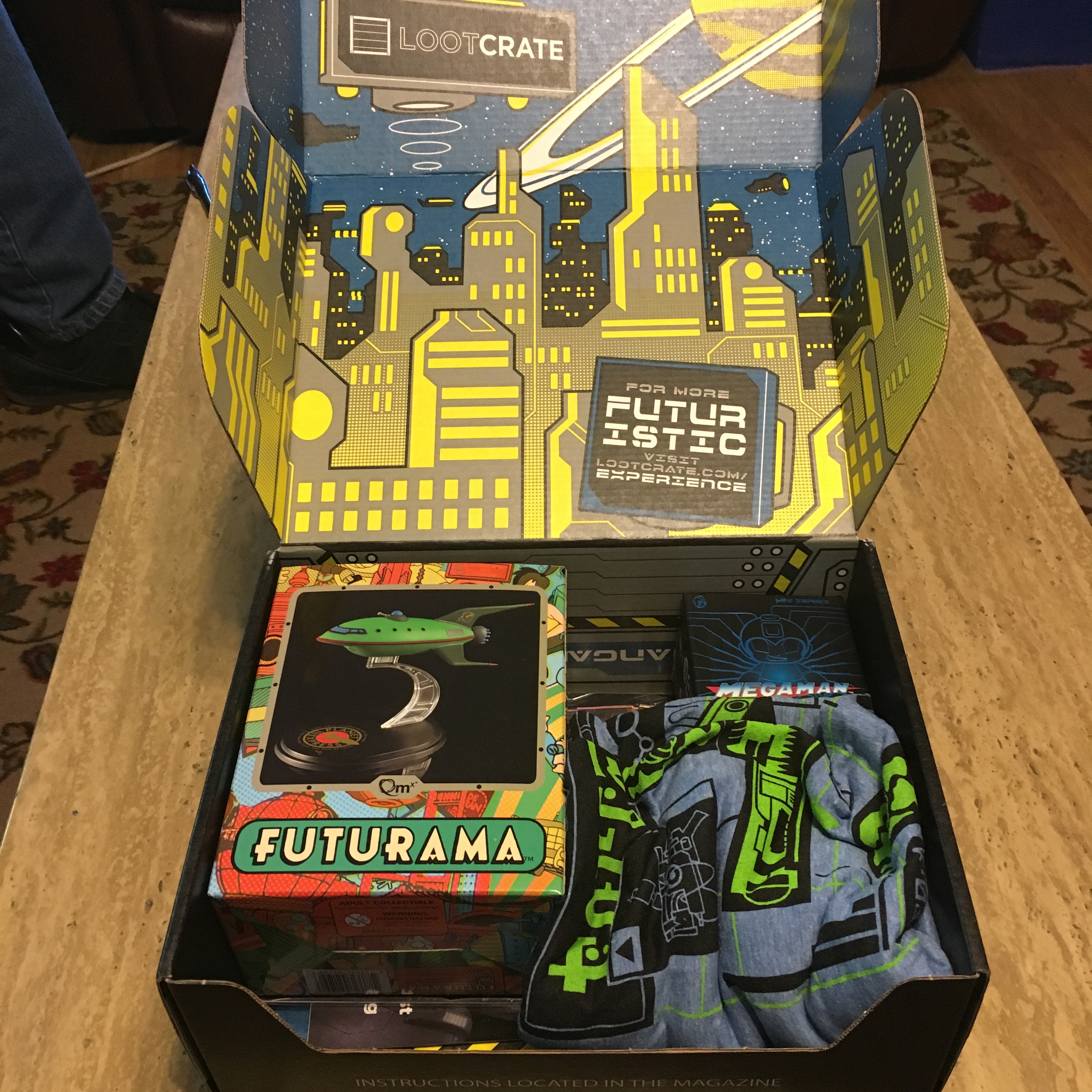 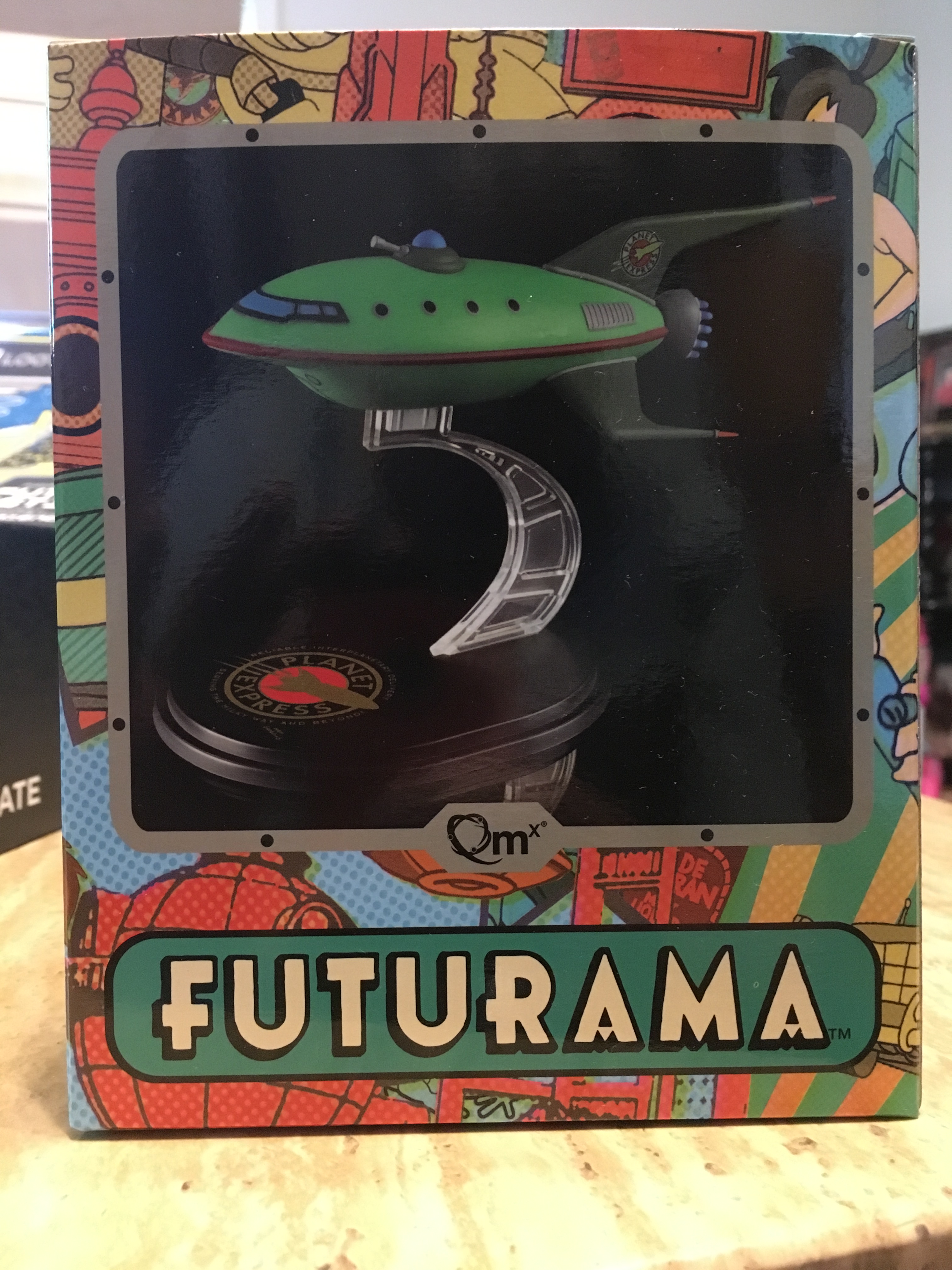 The first item that we received from the future is, aptly, a vehicle from the fantastic show Futurama. The Planet Express ship is one that evokes memories of all the crazy adventures that Leela, Bender, and Fry found themselves in each and every week. Whether it was facing potential death by snu-snu, or getting out of a deal with the devil, this ship helped guide the crew onto some fantastic, and fantastically funny, hijinks. This amazingly detailed model from Q-Fig will help us to jet around the galaxy in some relative comfort, and definitely help you get into some fun and funky adventures.

This month’s Futuristic t-shirt portrays one of the most versatile, wacky, and potentially dangerous futuristic gizmos ever made – Rick’s Portal Gun. While this t-shirt does look like it is the detailed blueprints of the insanely powerful portal gun, it’s probably a good thing that you can’t replicate the device in real life. If you have managed to catch even a single episode of the hilariously demented Rick and Morty then you know just what kind of trouble this gun can get the ubiquitous heroes into and out of each week. The creation of this device would lead to some fantastic adventures both through time and space, though if you used it in any way similar to Rick in the television show don’t be surprised if you too end up in an intergalactic prison for your efforts. 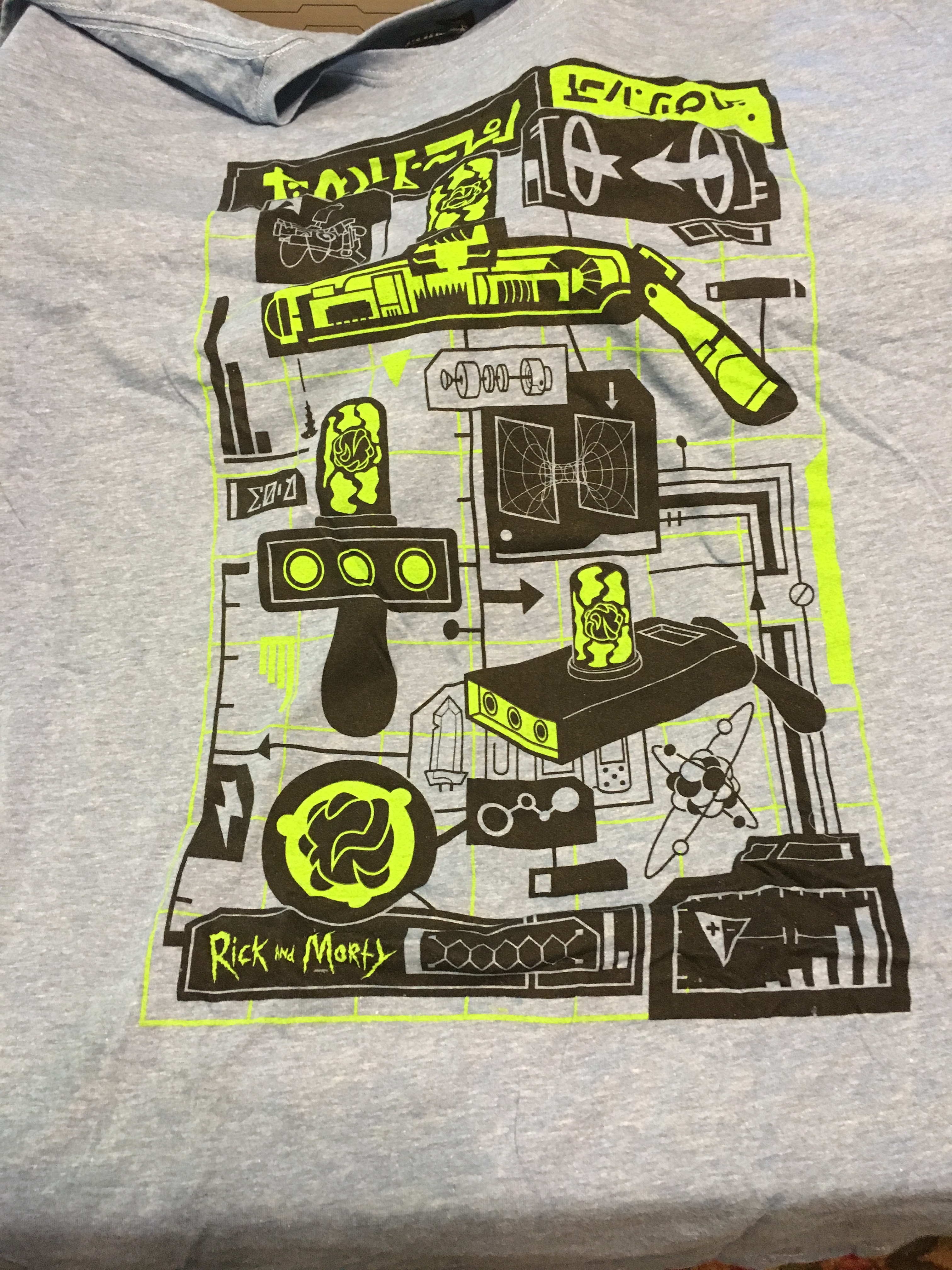 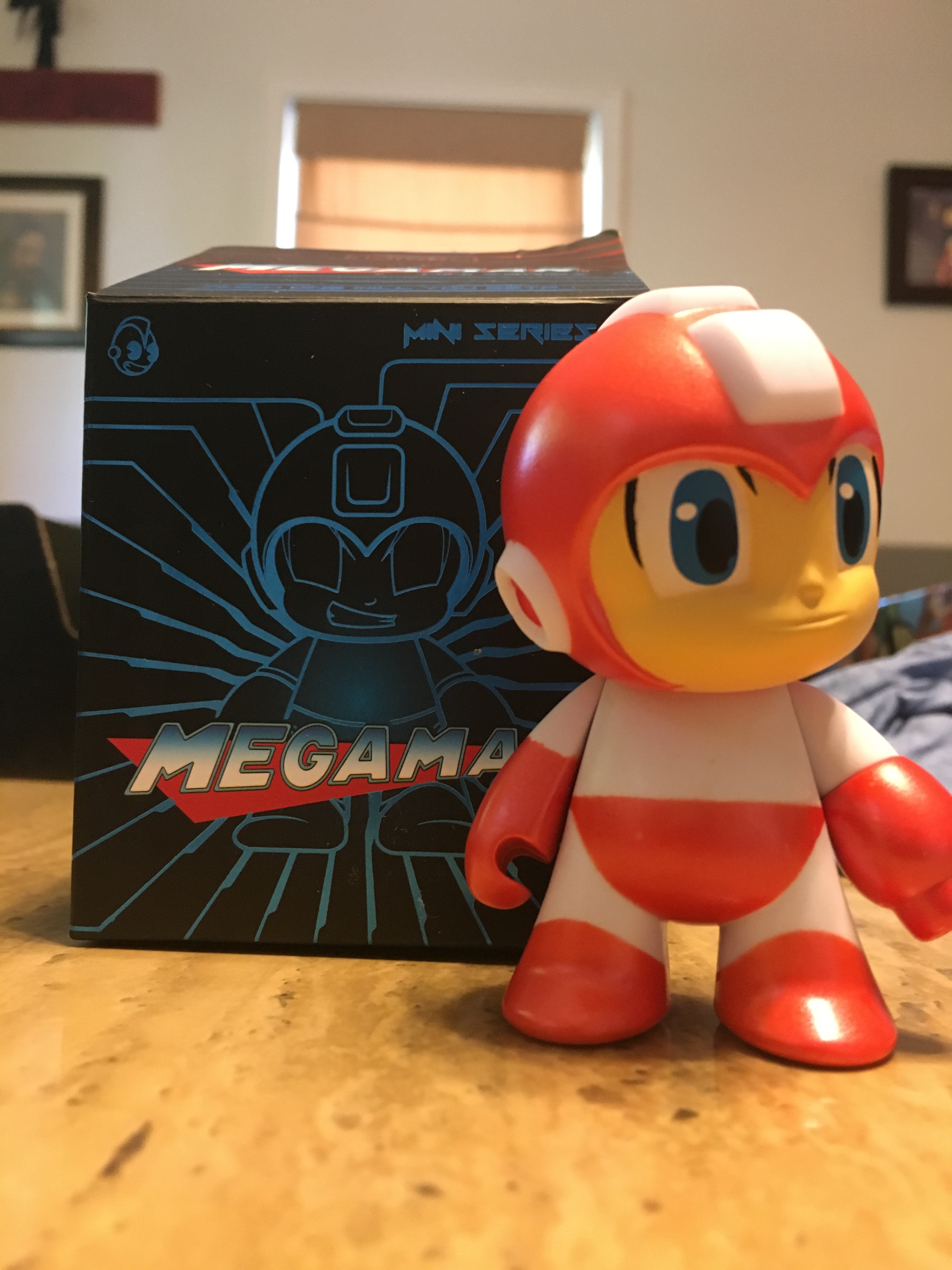 If you are going to be going on Futuristic adventures, then what better wingman could you have than the amazing Mega Man? While Mega Man may be a robot, there is no disputing the fact that he will be an invaluable addition to your crew as you battle against evil overlords and their minions. It cannot be disputed that the Mega Man’s ability to absorb the powers of those he fights will be handy. At the very least, you can have fun displaying this red and white variant of Mega Man in your collection.

When having a discussion regarding any kind of futuristic ships, robots, or even time travel, can it truly be a discussion without mentioning the U.S.S. Enterprise? Use this commemorative plaque (or at least the sticker of a commemorative plaque) to honor one of the most fantastic and storied vessels of exploration from the future. While this sticker may not actually turn what you stick it to into the Enterprise, it is something that you will be able to use to create a more futuristic atmosphere. Best of all, this is a wonderful recreation of the plaque seen in countless episodes and movies throughout the years. 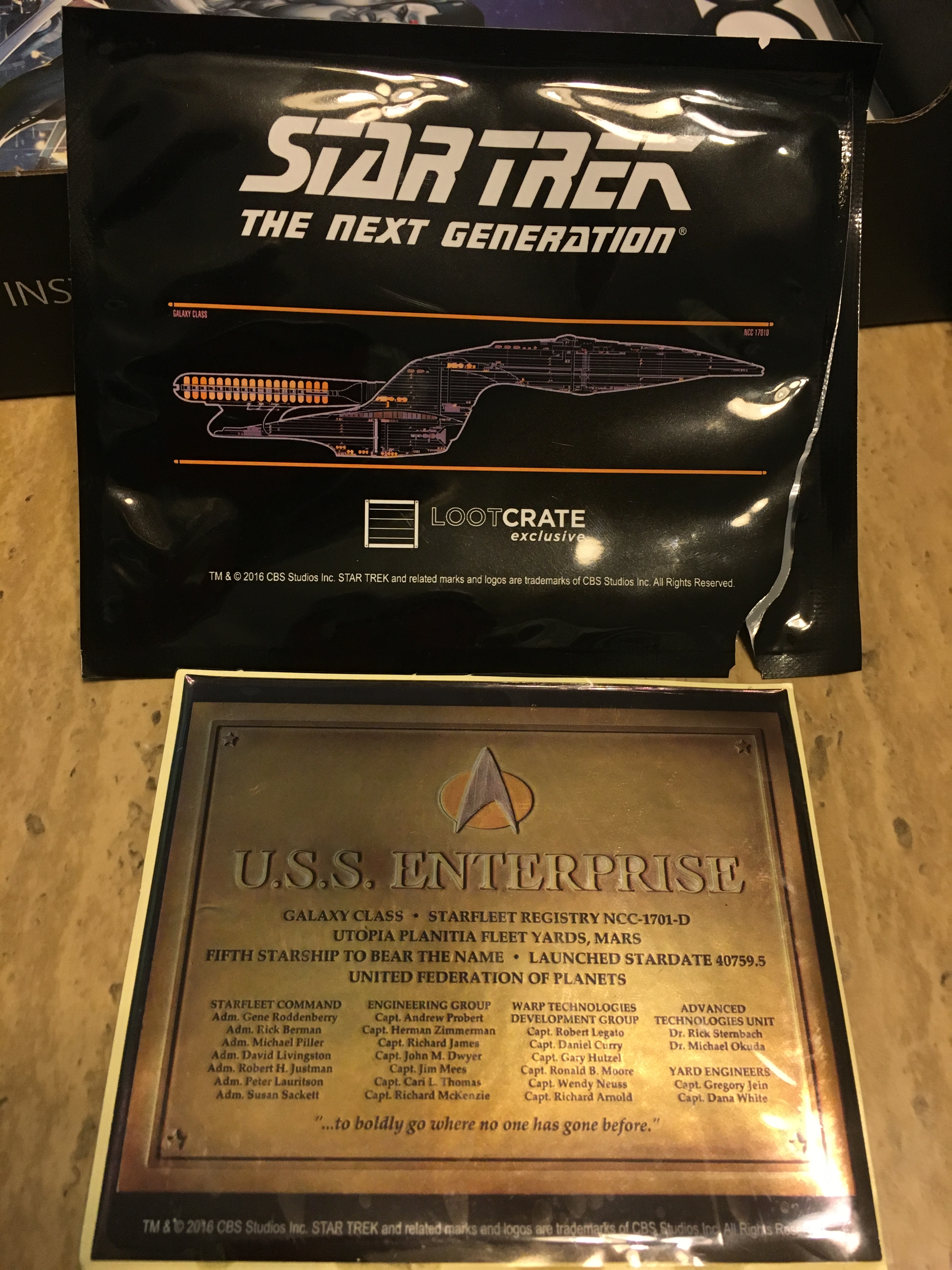 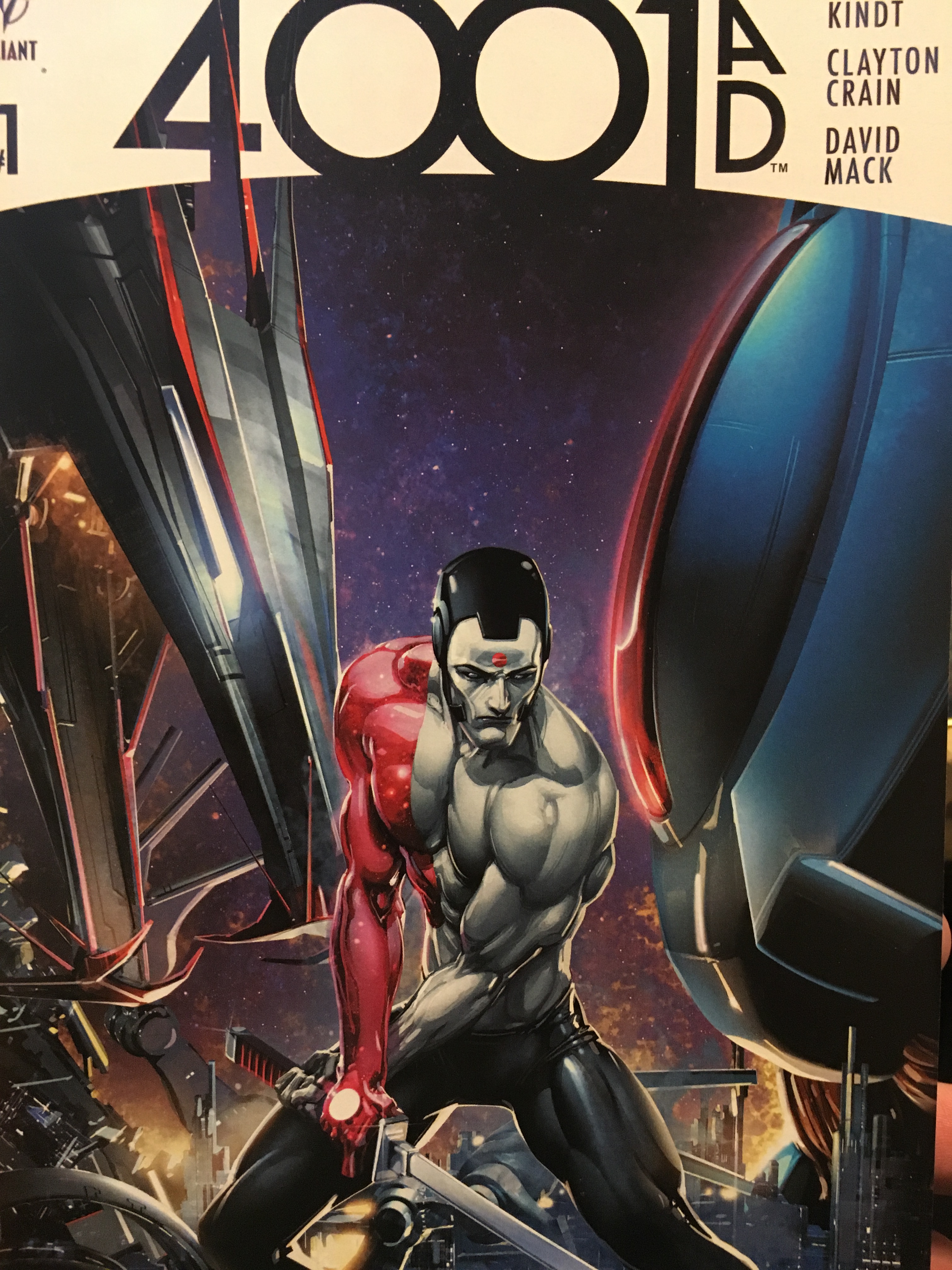 Comics are a fantastic way to look into the possibilities that the future can hold. In this month’s Futuristic Loot Crate, you will receive an exclusive copy of Valiant Comics’ 4001 A.D. In this comic you will be introduced to Rai, a technologically enhanced hero, that comes from a war torn future of the 41st century. Learn the secrets of Rai’s origin, and how he came to fight the good fight in an attempt to return freedom to the world. Join the fight against Father, and see what can be done to fight the future in perhaps the single greatest major crossover event of Valiant Comics. You will absolutely love this story that includes characters from RAI, X-O Manowar, Bloodshot, Shadowman, and [Classified]. Even though this crossover event started in May, there is still plenty of time to catch up on this fantastic story.

Each month with the basic Loot Crate, you will receive an exclusive commemorative pin. This month’s pin is a Star Trek commemorative pin that not honors the future, the franchise, and the late Leonard Nimoy. Along with each of these pins you will get a special code that you can use on the Loot Crate website which will allow you to obtain further exclusive material for video games. The code for this month’s pin will allow you to obtain a Starfleet Admiral’s commission Pack from the online MMORPG Star Trek Online. If you are into playing Sci-Fi MMORPG’s, then this is a perk that you do not want to miss. Beyond all of that, this pin simply looks outstanding! 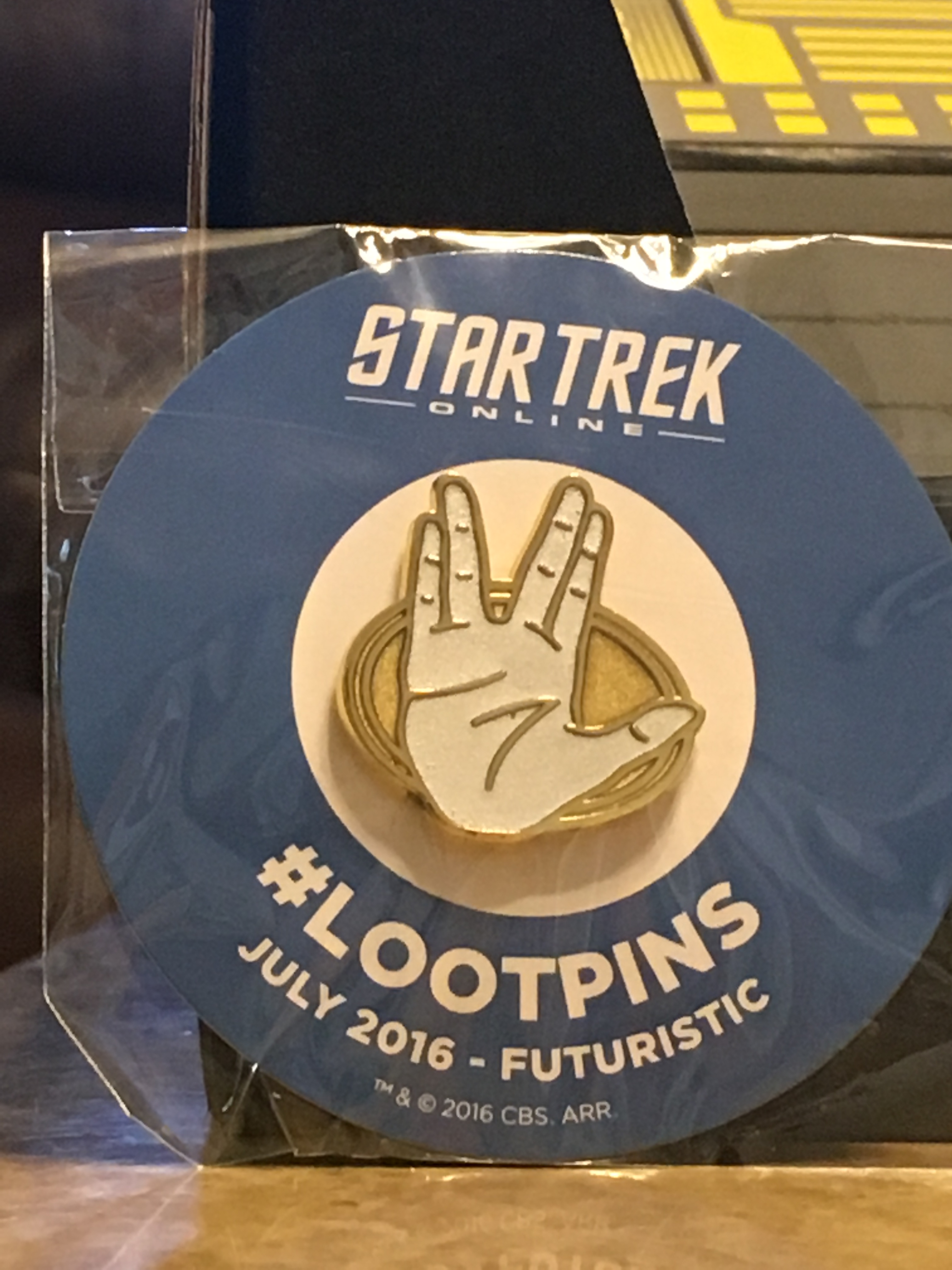 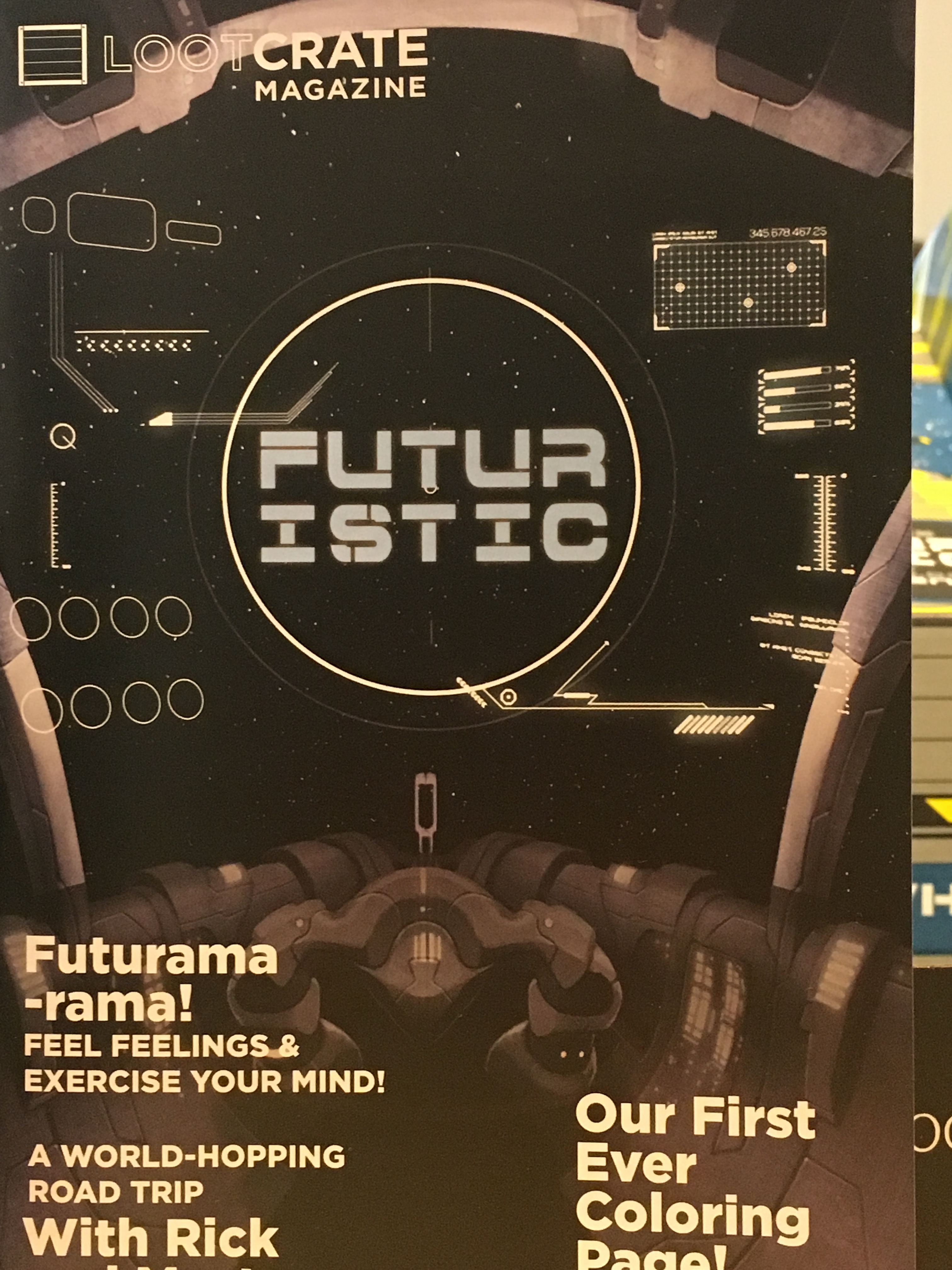 Who doesn’t wish that they were able to have a handbook for the future, along the lines of Marty McFly in the Back to the Future movies? Well, while it may not be possible to have the actual Sportsbook that Marty had, this handbook goes over quite a bit of informative details that you will love to learn about the items in each month’s crate. Additionally, in this month’s edition of the Loot Crate Magazine you will get something that has never been included in any previous edition…a coloring page. The Rick and Morty themed coloring page is one that you will have loads of fun coloring and customizing. We can’t help but wonder (and hope) that this feature continues to be included in the coming editions of LCM.

It was stated earlier that each month the interior of the shipping box is decorated to coincide with the monthly theme, in this case a Futuristic hangar. As you can see, with the items from this month’s crate you can create a busy spaceport. Interestingly enough, things can be spiced up even more if you include items from past Loot Crates to make (or recreate) any scene that you want. 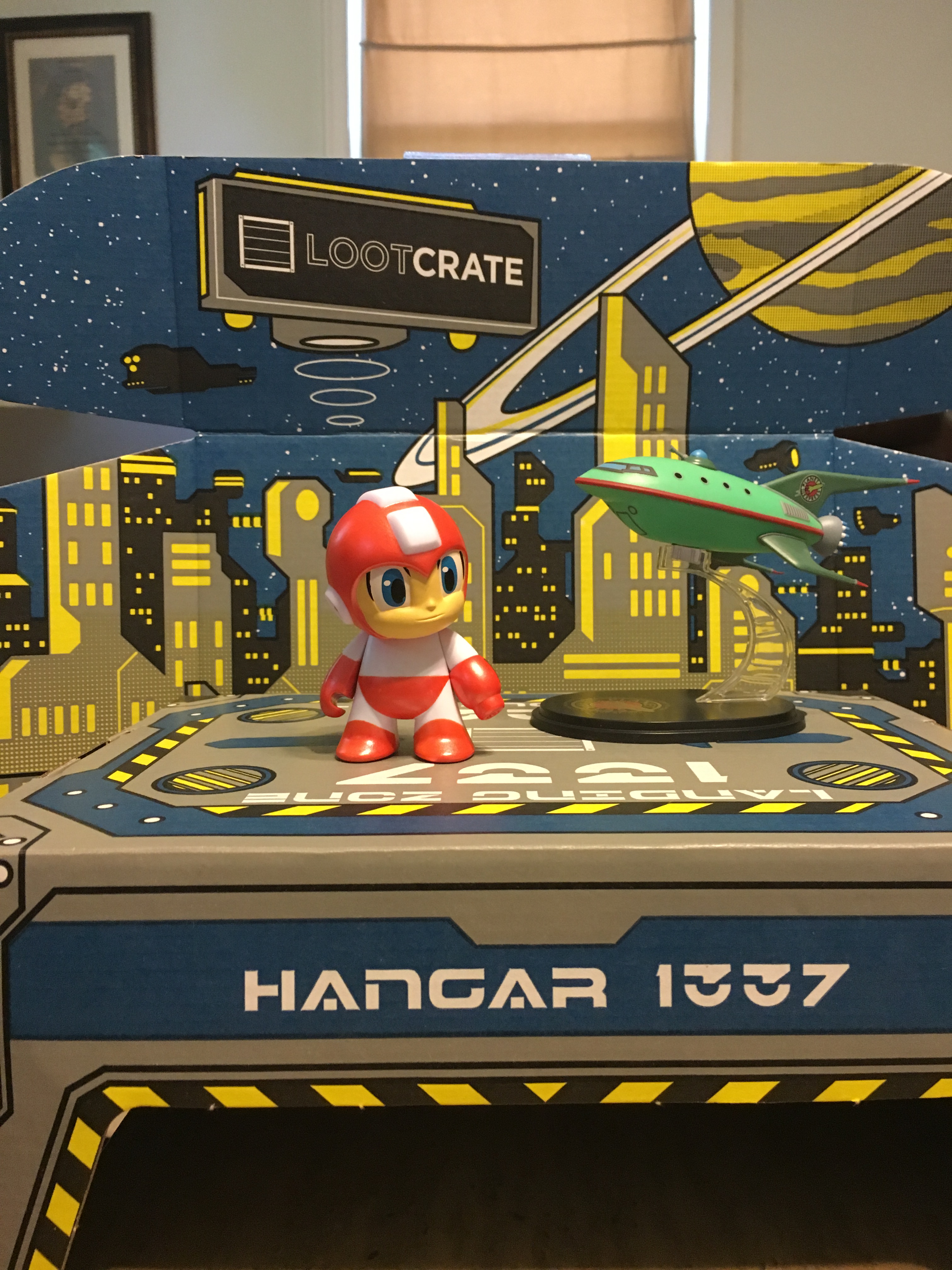