Our First Real Look At Yooka-Laylee

Throughout the mid-to-late 90’s, one of the strongest developers in the videogames industry was undoubtedly Rare, responsible for such hits as Donkey Kong Country, Goldeneye and Banjo-Kazooie.  However, since the company’s split from Nintendo in 2002, it would be easy to say Rare has struggled to regain the magic of their glory days.  This is due, in large part, to the exodus of a lot of the company’s classic-era talent over the last decade and a half.  Many have moved onto other companies and other projects, leaving Rare to focus on Kinect and Avatar-centric games for the XBox platform.

Thankfully for the Rare faithful, much of the company’s talent has gathered once again under the name Playtonic, and they have stepped up to the task of breathing life back into the games that they popularized so many years ago.  Playtonic’s first offering to the public is the cleverly named Yooka-Laylee, a spiritual successor to the popular Banjo-Kazooie franchise.  While sparse details were given previously, primarily for the purpose of launching a wildly successful Kickstarter campaign, all of it was conceptual at that point.  Now, a year after the game’s initial announcement, we finally have a full trailer to whet our appetites.

It becomes evident very quickly that the game is dripping with Banjo-Kazooie charm.  The titular duo is animated well, and designed with a simple but instantly classic look.  Some interesting supporting characters are shown off as well, including what appears to be a grumpy storm cloud guy, and what can only be the hilariously named Trowzer, a snake wearing pants and a hat.  A fair number of team-up moves are shown, including one where Yooka curls into a ball while Laylee rides frantically on top like a circus performer.  Not only that, but transformations are apparently back in the mix, as the trailer shows Yooka and Laylee morphing into a strange plant-like creature.

The level variety seems pretty solid, with standard jungle/temple and arctic worlds to run around in, and they all look massive as well as super detailed.  The visuals are crisp and exploding with bright primary colors with some nice effects on display as well, like Yooka’s fire breath.  I can’t express how excited I am at the notion of mine-cart segments as well, harkening back to Rare’s Donkey Kong Country days.  Also, stick around to the end of the trailer, for a fun little bit of self-deprecating humor from the developer.

As it stands, Yooka-Laylee appears to be shaping into a charismatic and loving homage to late 90’s adventure platformers.  I’d wager anyone who spent dozens of hours as a child collecting jiggies, bananas or stars will find themselves overcome with nostalgia in Playtonic’s freshman outing.  The game is slated for release in Q1 of 2017, for the Wii U, XBox One, PS4 and Steam platforms.  Personally, next year can’t come quickly enough for me! 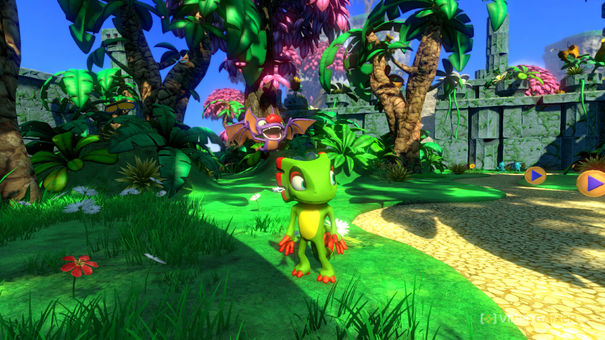