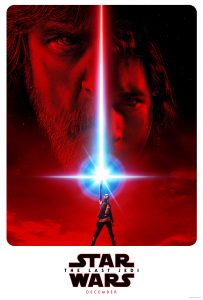 At the Star Wars: The Last Jedi panel at Star Wars Celebration 2017 in Orlando, fans and the world were treated to the first teaser trailer and a new poster for the highly anticipated film due out in December 2017. Lucasfilm President Kathleen Kennedy, director Rian Johnson, and stars Daisy Ridley, John Boyega, Kelly Marie Tran, and Mark Hamill participated in the panel hosted by Josh Gad. The film will be released in the U.S. on December 15, 2017.