Just who is the worst, or the best, of the Sith has been an on-going debate virtually since fans found out that Darth Vader was a “Lord” of the Sith. After all, if you have a Sith Lord, that means that there must be other Sith out there, right? While there is a rather large number of Sith Lords mentioned throughout the pages of Star Wars history, there are only a few that can actually be called the worst of the worst. Here are the Top 10 Sith Lords in Star Wars. 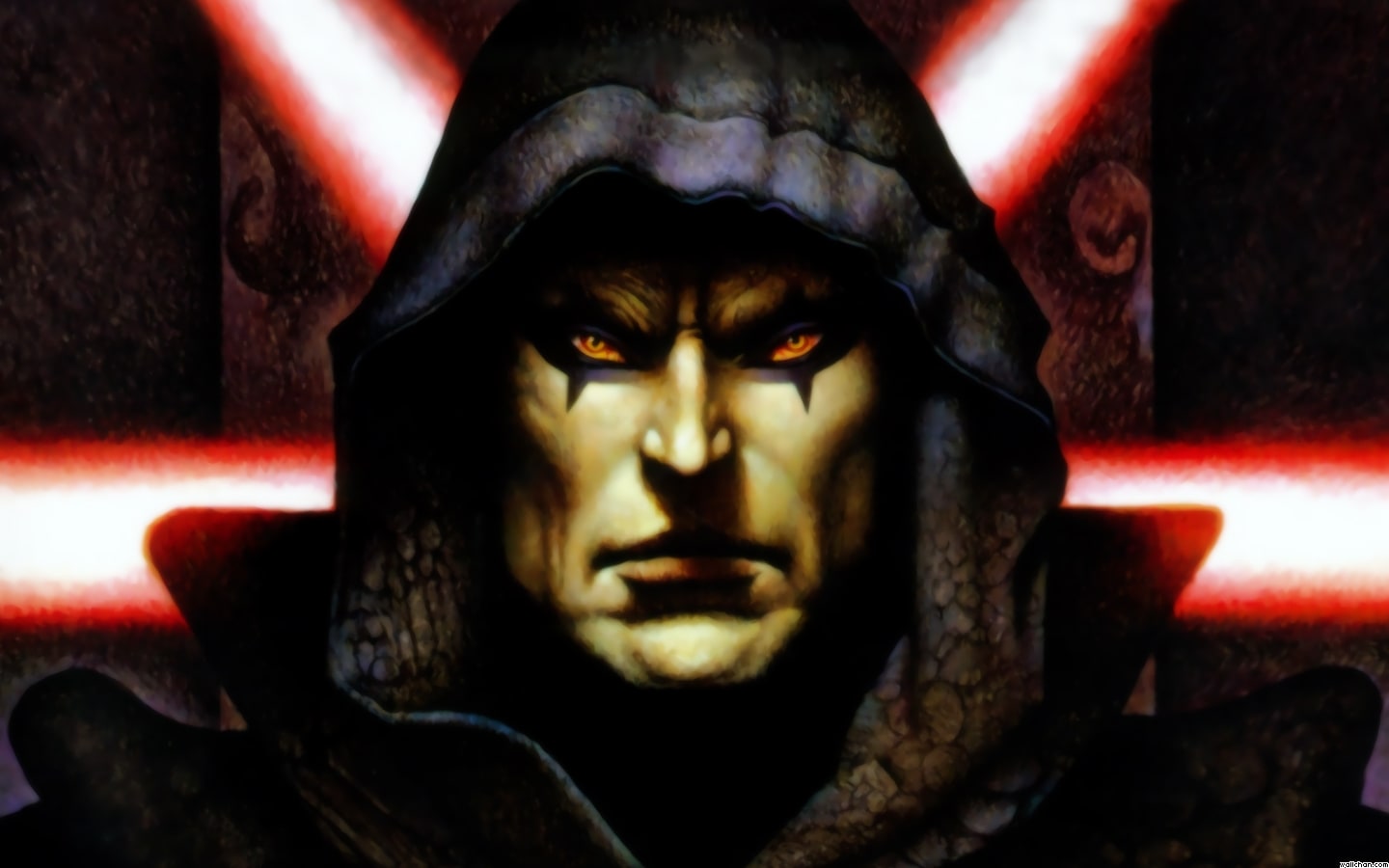 If there is any Sith that has had as large of an impact on the Sith, and the Galaxy, than Darth Bane, well…they might be on this list. That being said, Darth Bane is without a doubt one of the most influential Sith Lords ever. As the sole survivor of the Sith Purge at the hands of the Jedi Order 1000 years prior to the Battle of Yavin. It was Darth Bane that created what was known as the Rule of Two (One Master, One Apprentice) in an effort to hide from the Jedi Order, and bring about Galactic domination and revenge against the Jedi. It was this desire for revenge that fueled the hatred of the Sith for the next 1000 years. Bane was the Sith Lord that Darth Maul was referencing when he said “At last we will reveal ourselves to the Jedi. At last we will have revenge.”

Guys aren’t the only ones to have joined the ranks of the Sith Lords, as is seen with Darth Traya, Dark Lady of the Sith. Traya was one of the Sith Triumvirate that ruled over the Sith after the Mandalorian Wars. Prior to the wars Darth Traya was a Jedi Master, and was actually the one that originally trained the one person who would become Darth Revan. When a significant number of Jedi followed Revan to war, Treya was blamed and exiled from the order. Over time, she was overthrown by the other two members of the Triumvirate (Darth Nihilus and Darth Sion) who were also considered Force Wounds as she was. (Brief note – A Force Wound is a person or place that experienced an immense loss of life, thus causing a whole in the Force. It is speculated that the destruction of Alderaan created such a wound.) Once she had exacted her revenge upon the Sion and Nihilius, she was then defeated by The Jedi Exile, Meetra Surik. 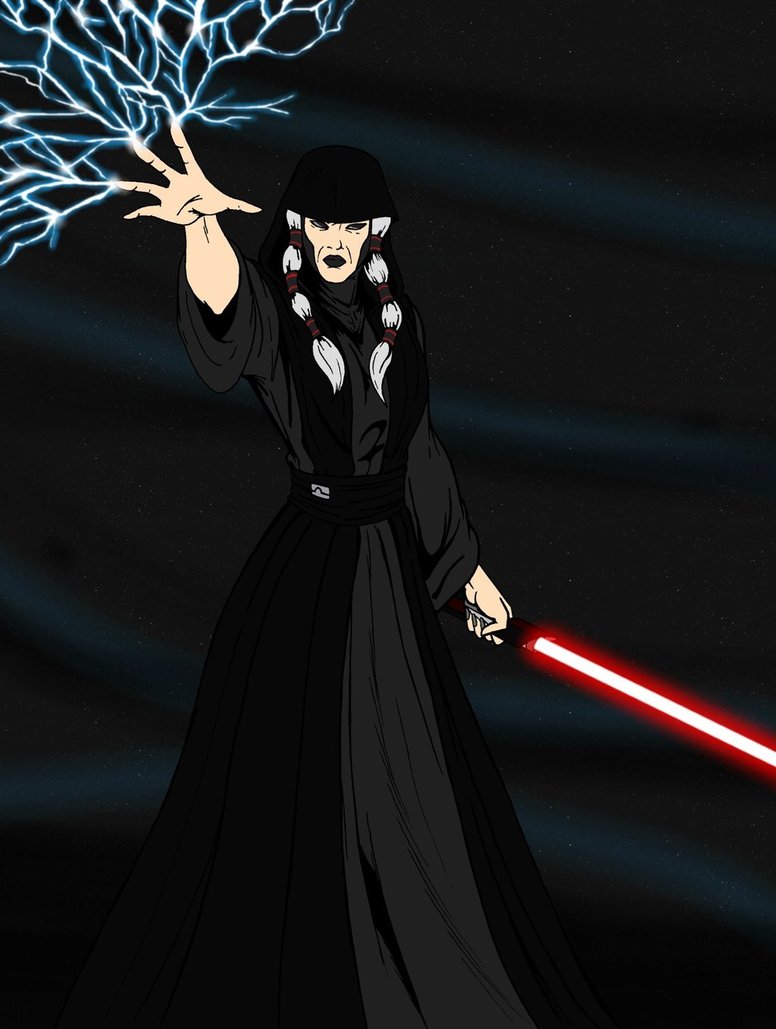 Exar Kun started off as a dedicated Jedi Knight who unfortunately had a bit of a temper, and an insatiable curiosity for things that he shouldn’t. While he was exploring, and tracking down ancient texts, he came across the tomb of an ancient Sith Lord named Freedon Nadd. Based on the promise of even more knowledge and skills from the wraith, Exar went to the ancient Sith homeworld of Korriban where his fall to the dark side was finally complete. Kun then based his operations on Yavin 4 (the same moon that the Rebel Alliance would use 4000 years or so later) and waged war on the rest of the Galaxy, which ended up leading to the Mandalorian Wars, and even later the conflict with Revan and his forces. Exar Kun is also attributed as the creator of the double-bladed lightsaber, and part of the reason why it has retained a reputation as being associated with the Dark Side.

Darth Sidious, born Sheev Palpatine, was the one Sith Lord that was able to exact the full measure of revenge against the Jedi that was mandated by Darth Bane. Through the political machinations of Darth Sidious, the Sith were able to take control of most of the Galaxy for almost 20 years without anyone but the few remaining Jedi knowing what had happened. While Sidious was a true master of the Force (he was able to hide his evil Force presence from the likes of Master Yoda, and fight him to a standstill), his greatest skill lied in the political arena, and his ability to manipulate others. Sidious was the one that orchestrated the events leading up to the Clone Wars, and who played upon the distrust that the Jedi Council had for what they didn’t recognize, and was able to subvert the prophesied “Chosen One” to his side. 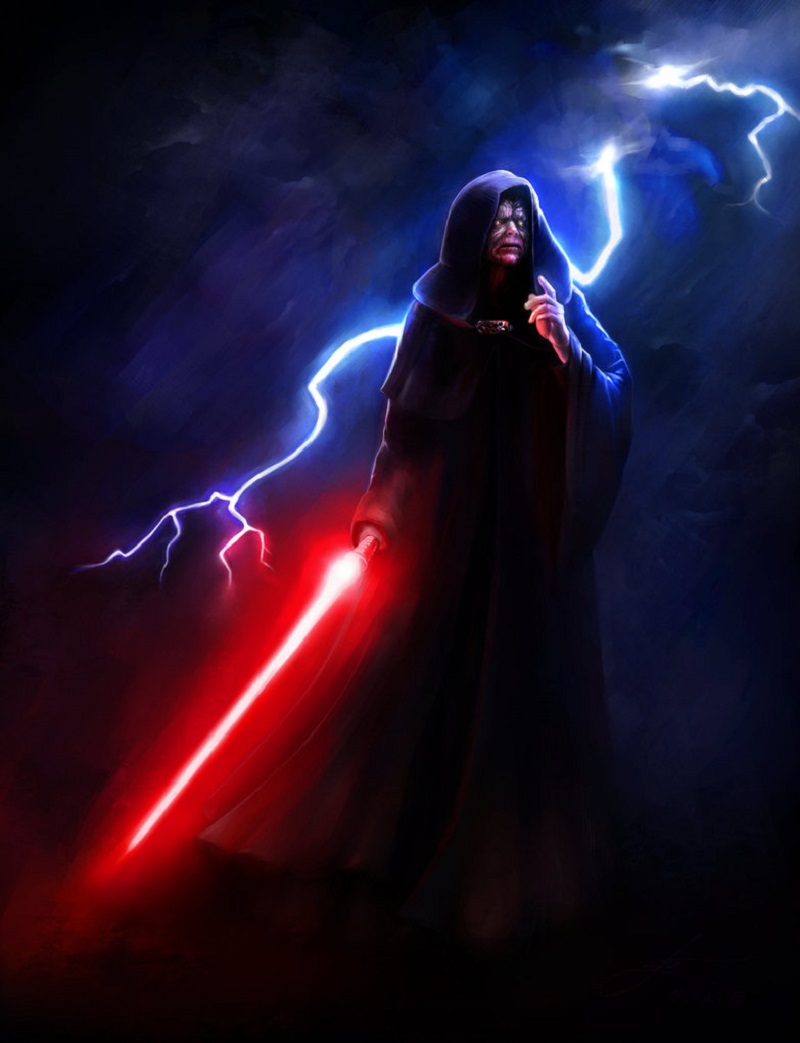 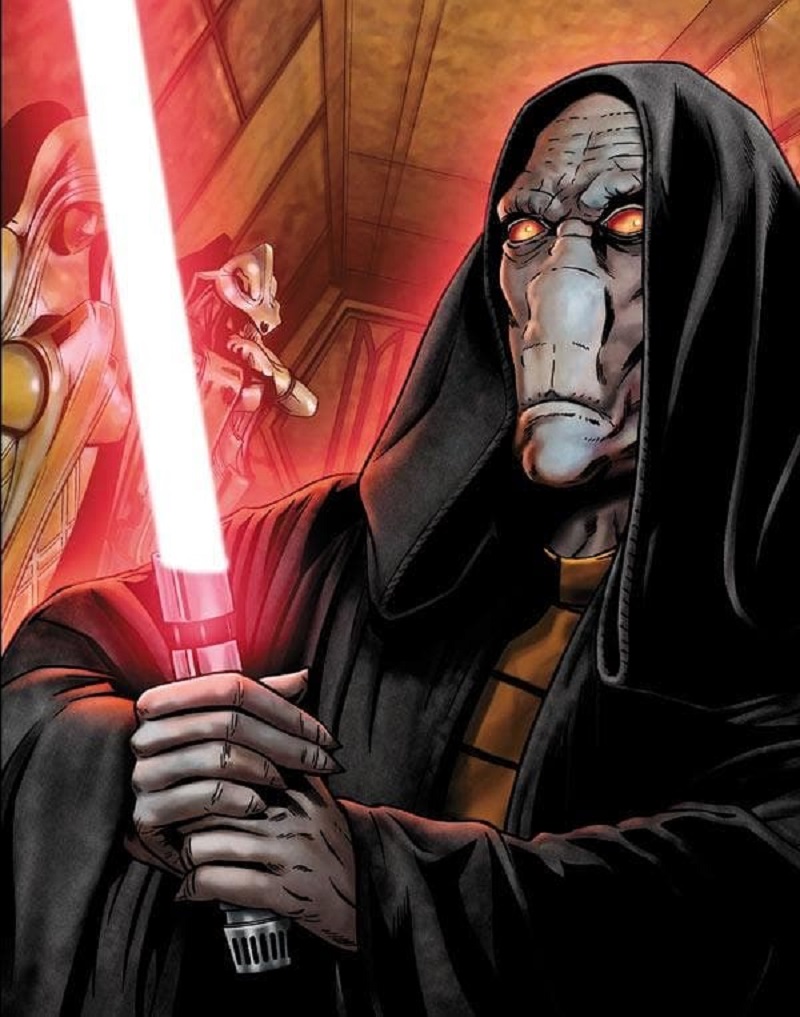 Not much is truly known about the Dark Lord of the Sith known as Darth Plagueis. What is known though is that he is the one that helped teach Darth Sidious the ways of the Force, put the final polish on Sidious’ political training, and was such a master of the Force that it is rumored that he could keep people from dying. It is also rumored that he was a master manipulator of midichlorians, the bridge between mortals and the Force, to the point that he could even create life where there was none before. Unfortunately, this skill was not a passive one as he found out when his apprentice killed him while he was asleep. Even with his death having been well documented, his mastery was so strong that even to this day rumors abound that he may still live and continue to influence galactic events.

Also known as the Lord of Pain, Darth Sion was a member of the Triumvirate following the Mandalorian Wars and the conflict with Revan. In many ways, Sion has the appearance of a zombie, though there is some dispute about the exact color of his eyes. According to some one of his eyes is white, and the other is brown, while others say that they glow a dull red as he utilizes the Force. Throughout his life, Sion sought death and longed to leave this life. Though he did not want to leave this life without accumulating as much power as possible. Among the Triumvirate, he was the one that was responsible for ruling of the Sith Assassins, and his base of operations was focused primarily on two planets. The first being the ancient Sith homeworld of Korriban, and the second being the Force Wounded planet of Malachor. Due to the events of the wars, and the actions that Sion and Nihlius took while upon the planet, Malachor wouldn’t truly be healed until sometime until a decade or so prior to the Battle of Yavin.

The being known as The Son is, strictly speaking, not a Sith. That being said, he does deserve a spot on this list for no other reason than being the living embodiment of the Dark Side of the Force. Among his many impressive powers was that he had the ability to change his form at will. This is not the same as changlings such as the bounty hunter Zam Wesell (who, coincidentally enough also had a confrontation with Anakin Skywalker). Rather, The Son could actually change his body into the other creatures. While he preferred to manipulate his opponents into doing what he wanted, the Son was not afraid to take physical action. Even though the Son could effectively use bladed weapons, he did not utilize a lightsaber. Instead his preferred weapon of choice was to use Force powers such as telekinesis, Force lightning, and others.

Prophesied as the Chosen One, Anakin Skywalker was foretold to “Bring Balance to the Force.” However, this was not exactly done in the way that many Jedi thought it would be. For some reason the Jedi interpreted this to mean that the Dark Side (or Sith) would be eradicated, and tried to teach Anakin that the best way to do this was to suppress all emotions. Naturally this lead to a lot of issues for Anakin, the least of which was dealing with loss and potential loss. Whenever Anakin was faced with a severe emotional trauma (i.e., the death of his mother, or the loss of his wife) he snapped. The Jedi order even tried to say that positive emotions such as love could lead to the Dark Side. Due to this eventually self-fulfilling prophecy, Anakin fell and became Darth Vader, the Dark Lord of the Sith, and arguably one of the most powerful Force Users of all time. 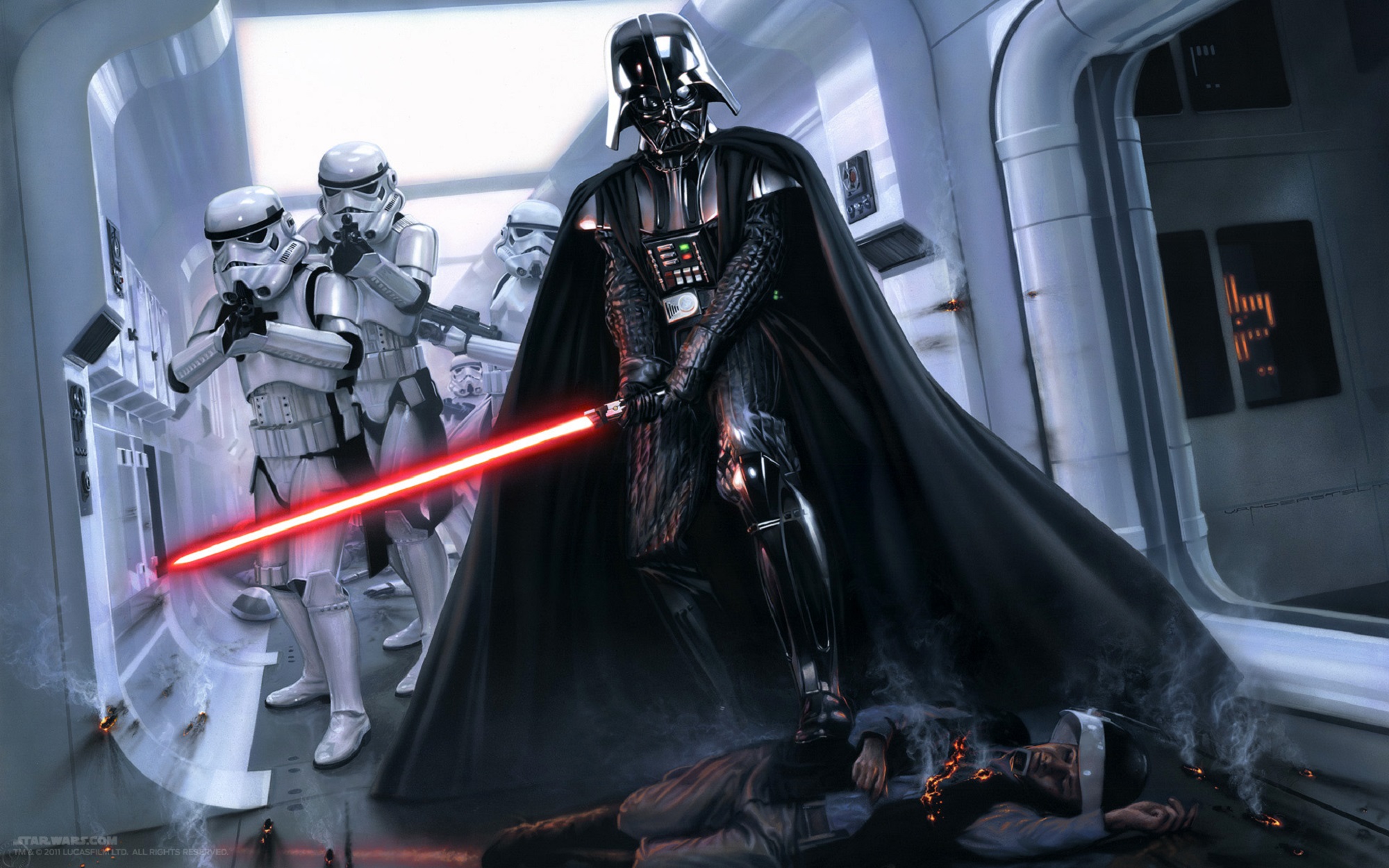 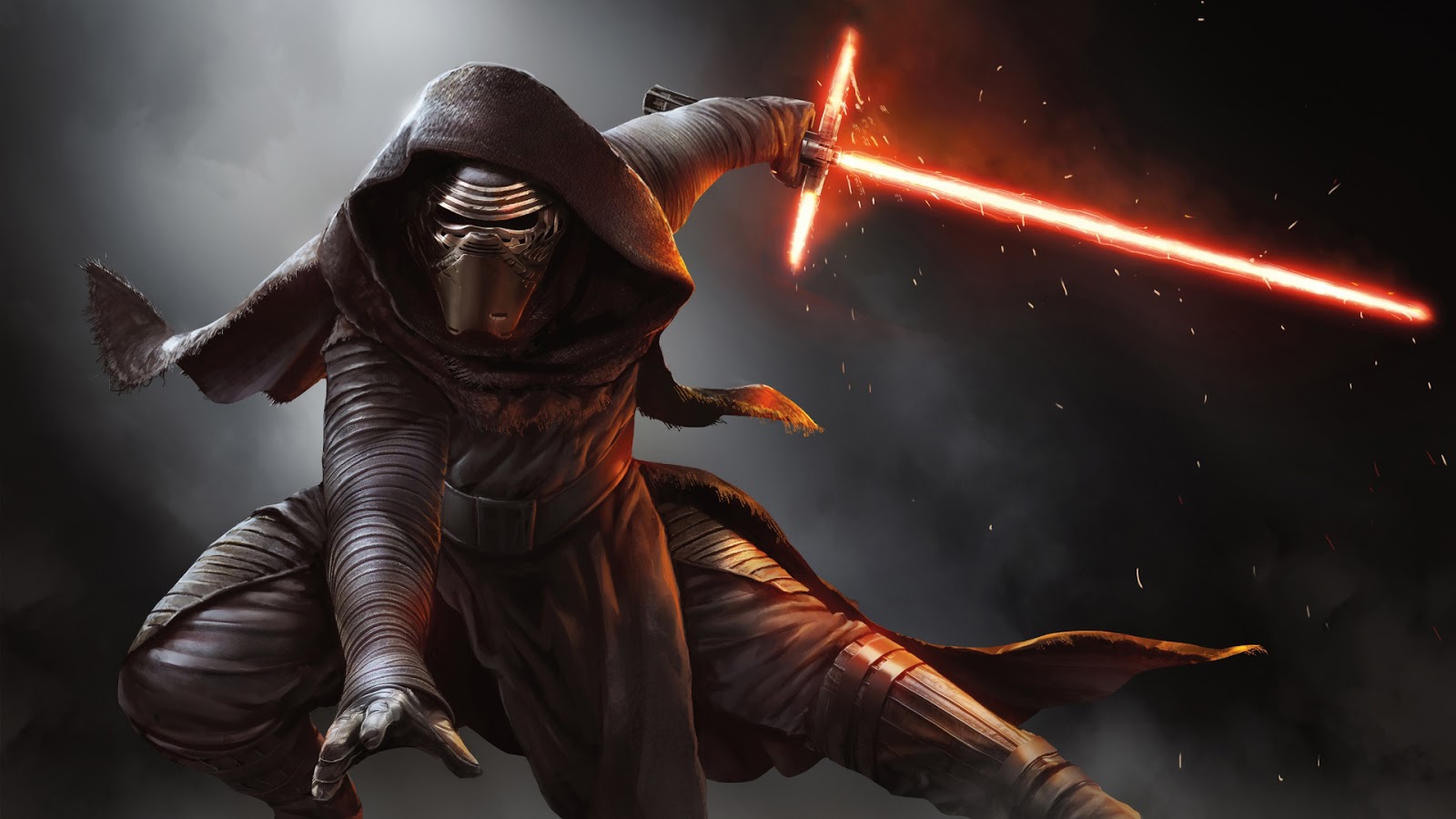 Strictly speaking, Kylo Ren may not qualify for this list due to the simple fact that he is not a “Sith” Lord, but rather a member of the Knights of Ren. While it is still open for some speculation as to who the Knights of Ren are, what is not open is whether or not Kylo (born Ben Solo) is a powerful dark side user. Militarily, he helped decimate the fledgling New Jedi Order, helps to lead the Knights of Ren, and is currently one of the three most powerful members of the First Order. Then, there is his mastery of the Force. Not only can he block blaster bolts like any good Force wielder, but he can freeze them in midair, rip the very thoughts out of people’s minds, and those are just two of the “newer” Force powers that we have seen. It’s fair to say that he is only going to grow in power as his training continues under the mysterious “Snoke.”

Naga Sadow was a Dark Lord of the Sith, and a member of the true Sith race at that, who existed roughly 5,000 years prior to the Battle of Yavin, and helped guide the Sith Empire to the very brink of dominating the galaxy during the Great Hyperspace War. One of the Sith Council, Sadow was born and raised on the new Sith homworld of Ziost. Politically, and idealogically, Sadow was considered a “progressive” Sith, which means that he proclaimed an expansionist outlook. This outlook is what, in the end, not only lead to the end of the Sith Empire as it was known for millennia, but also set the tone of the Sith grasping for as much power (personally, politically, and within the Force) forever any adherent to the Sith philosophy that came after him. 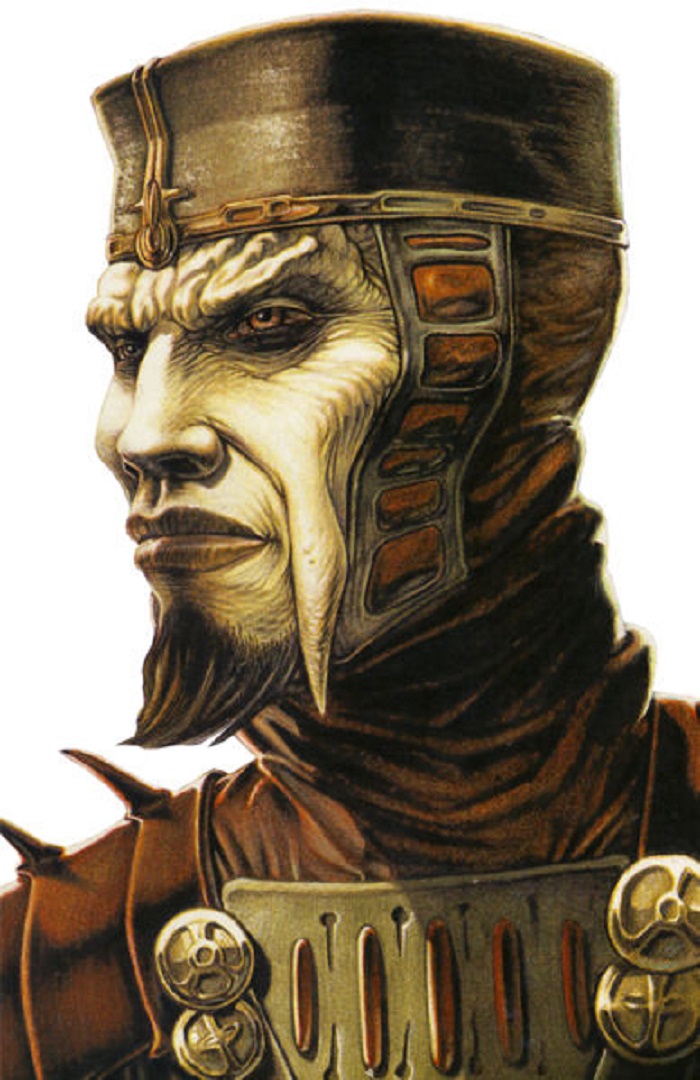 There you have it, the Top 10 Sith Lords…at least, according to iGeekOut. How close did we come to your list? Did we miss something, or someone, that should have been listed? Perhaps we included someone on the list that we shouldn’t have? Whatever your point of view, please feel free to share it! Don’t hold it in, tell us your point of view in the comments below, and who knows it may just be included on a future edition of this list.