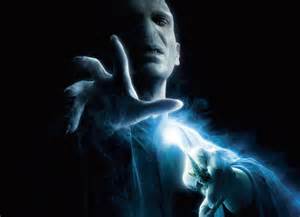 The man who would become the vilest, and most powerful Dark Lord in the history of the British Wizarding World sadly didn’t start off evil, even though some would say that he was born to it. Tom Marvolo Riddle, Jr., was born to Merope Gaunt and Tom Riddle. Merope was the only daughter of the Gaunt family, who could trace their lineage back to the Hogwart’s Founder, Salazar Slytherin. However, this supposedly illustrious family could only best be described as white trash, and Merope grew up unloved and abused who developed a crush on the son of the local Lord, Tom Riddle. After Merope’s father and brother were taken to Azkaban for using magic to abuse the non-magical (muggles) in the area of their home, Merope brewed a potent love potion (Amortentia) to use on Tom, and live her dream of being his wife. Once Merope became pregnant with Tom Junior, she stopped using the love potion, and Tom Senior left. Merope, sick with grief, left the newborn child at an orphanage, only leaving a note with what to call him, and died.

As young Tom grew in the orphanage, the other children viewed him as different, and ended up abusing him for his perceived differences. However, as Tom grew older he learned how to control that which made him different, namely magic, and used it to keep those who abused him in fear of him. Shortly after this he was introduced to the Magical World of Great Britain by Professor Albus Dumbledore, when he began to truly master his magical powers and amass his army of followers, the Death Eaters. After graduating from Hogwarts, he slowly began his reign of terror which would continue virtually unimpeded until October 31st, 1981, when he was stopped through actions taken by James and Lily Potter to protect their son, Harry James Potter. The Dark Lord went after the Potters in response to a prophesy:

Professor of Divination, Hogwart's School of Witchcraft and Wizardry

Unfortunately, prior to his downfall, the Dark Lord took several steps to ensure that he would never die, through the use of Horcruxes. These Horcruxes, also known as a soul jar or a phylactery, contained a portion of his soul, which would help tie him to the mortal plane until he could be reborn. After having lost his physical body to the young Harry Potter, Voldemort took the next 13 years to try and regain his body. When he did finally regain his body, he immediately started gathering his former followers and creating a new army that he then used to briefly take over the British Isle’s. Luckily, after a titanic battle at the famous Hogwart’s School for Witchcraft and Wizardry, Lord Voldemort was finally defeated by Harry Potter.