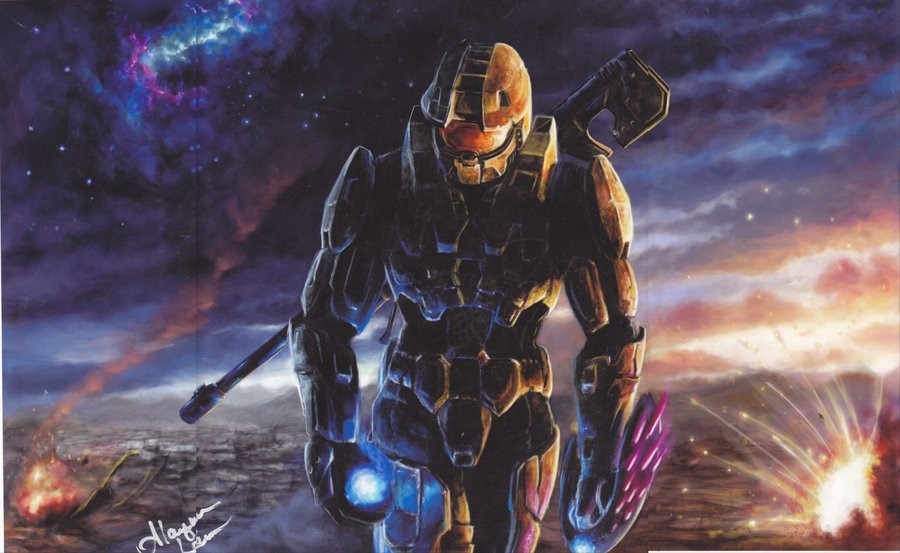 John is originally from Eridanus II, a small world under protection of the UNSC (United Nations Space Command). At the age of six he was kidnapped by a Dr. Hasley to be a part of the UNSC’s Spartan II project, a project intended to produce an elite group of operatives (Spartans) to be able to fight off the increasing rebel threat. The training was vigorous starting the day at six in the morning working until the afternoon to start their classes for things like tactics and algebra. Despite being physically average in comparison to the rest of the Spartans, John (due to his luck) became the leader of all 75 Spartans by the time they were eight. It was at the age of 14 that their physical augmentations took place, this augmentation increased their reflexes and strength dramatically and on top of that it made their bones become as strong as steel reinforced concrete. Due to the amount of strain that these augmentations put on the body many of them died, they went from 75 down to 33.

It was shortly after that when during a test John killed one ODST (Orbital Drop Shock Trooper) and put two others in the hospital in a fist fight. By the time the Spartans first mission came around they were elite soldiers unmatched in combat and in tactics, and John was now the rank of Master Chief. The Mjolnir armor is a huge suit made mostly of titanium, but with many other materials as well. There is not delayed response for the armor to move due to the fact that it connects to his brain through an implant on the back of his head, in that way the armor will move in sync with his own body. His armor’s power source consists of nuclear power cores so he basically has unlimited power forever. His armor did not have an energy shield on top of it until shortly after the humans first run in with the Covenant. Their Jackals had a shield attached to their arm and the humans reverse engineered it to work as a passive shield on the Mjolnir armor. As a side not the Elites in the Covenant did not have energy shields until they stole the tech back from the humans. Not a single Spartan died in combat until the fall of Reach (the UNSC’s largest military base), on that fateful day most of the Spartans died while falling through the atmosphere and hitting the ground.

While Reach was falling Master Chief was given Cortana the AI that would be with him throughout most of the games. Cortana was another creation of Dr. Hasley, Cortana was actually created from a clone of Dr. Hasley’s brain. Because of this Cortana is similar to Dr. Hasley as far as mannerisms go. One main problem with the AI’s is that they typically have about seven years before they think themselves to death and become unpredictable and erratic. Cortana lasts eight years before she starts to decay, this due to the fact that Cortana is the most advanced human AI ever made (up to that point in time).

Master Chief ended up crash landing on a forerunner halo ring while fleeing the Covenant following the battle of Reach. Since he had Cortana with him she began to collect data on both the Covenant and forerunners while John made his escape from the halo ring. While escaping he managed to nearly single handed capture a Covenant flagship in the area. After assembling a small team of marines that survived the crash the Chief then moved on to destroy a large chunk of the covenant armada by destroying a refueling base. He then returned to Earth with all of the Intel gained, without which the humans were doomed to lose the Human Covenant war. On top of gaining Intel for the UNSC Master Chief also went on to kill as many of the three Prophets (Covenant leaders) that he could.