Harry Potter and the Cursed Child Parts I & II

If you have been any sort of fan at all of the Harry Potter franchise, then you know what happened recently…the opening of the new play Harry Potter and the Cursed Child Parts I & II, as well as the release of the story in book format. This story is now, officially, the eighth part of the Harry Potter franchise and the next chapter in the story of Harry, Ginny, Hermione, Ron, and Draco, as well as their children. As can be expected, when the book version of the script was released for general publication I was right there to get my copy of it, and start discussing what was good (and bad) about the story. While reading through the book there were a few things that I was looking for while I was reading it. These items, or areas of focus, are: Fun, Story, Flow, Characters, and Revisit Value. Though I will try my utmost to keep them to a minimum, this review will contain spoilers…you have been warned. 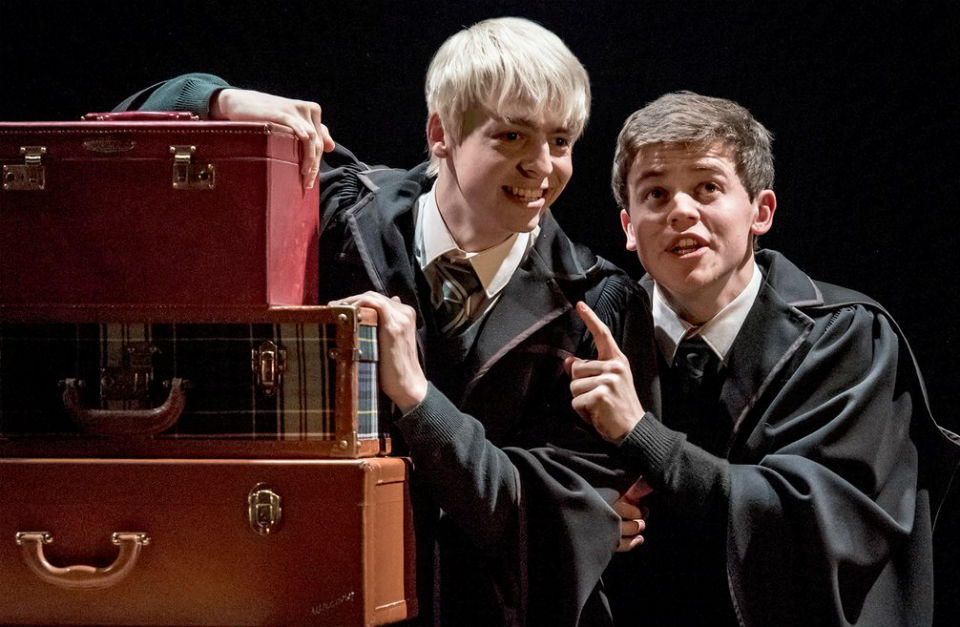 Just as with any of the other stories in the Harry Potter franchise, The Cursed Child is fantastic fun. As I was reading this story I found myself easily falling back into the Wizarding World. In many ways it was exactly like visiting old friends and family again. As with each of the books (and movies) that preceded this installment, you can easily see the magic, wonder, mystery, and even fear that makes up the British Wizarding World. Everywhere you turn in this book, you can see just how much fun (or in some cases…misery) the children are having going to Hogwarts and learning how to become fully fledged witches and wizards. The sheer joy that Albus and Scorpius have in finding a kindred spirit is a true delight to behold.

In Harry Potter and the Cursed Child Parts I & II, the story is both vastly more complex, and much simpler, than any of the previous installations of the franchise. Just as with any of the previous installments of the franchise, the title of the story gives you a major clue as to just what problem the heroes are going to be facing. Additionally, just as with any of the previous stories within the world of Harry Potter, The Cursed Child provides additional insight, background, and value. While you may go into the story thinking that you know what is going to happen, you constantly find yourself questioning what you know about not just the major characters but also the overall premise of Harry Potter. Throughout the story, Albus continues to find himself compared to his father and is seen as coming up short. A perfect example of this is seen when he is first sorted at Hogwarts into Slyterin House, after which he is ostracized by the majority of the school, and even his former best friend…his cousin Rose Weasley-Granger. 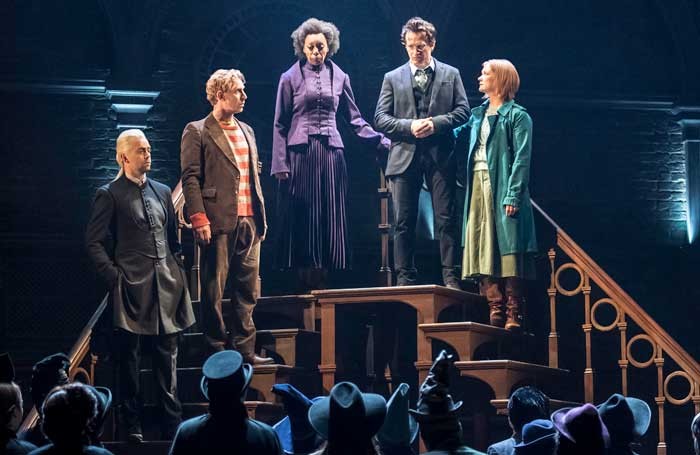 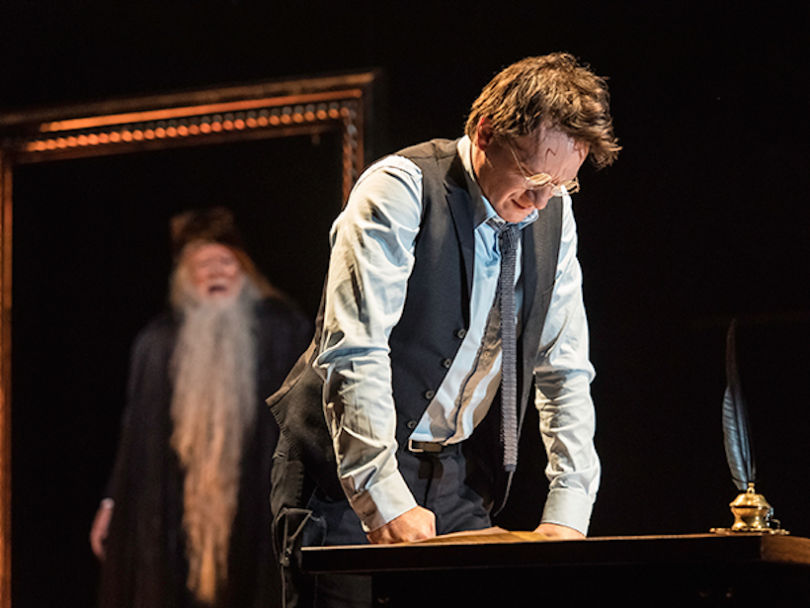 One thing to remember about Harry Potter and the Cursed Child Part I & II is that it is a play. As such, it is written as a script. While this may be a little off-putting to those who have never read a play before (i.e., younger fans) it is really easy to get past and just dive in and enjoy the story. I mention that this is a play, because there is a definite sense of pacing that you can almost palpably feel when reading this story. If you have ever been to a play, then you know what type of pacing that I am talking about. By no means is it a distraction, though it is noticeable. Overall, the pacing and flow of the general story is very well done. However, where this story truly shines is in the dialogue between the characters of Albus and Scorpius. The timing of these two comes across as completely natural, honest, and at times a little childish. Not childish in the sense of clumsy, but rather in the sense that these are two children who are trying to work through their life and come to know who they are. This sense of timing is not just limited to the dialogue, but to the overall story itself. There are no truly wasted scenes, and each subsequent scene has a sense of building off of the previous until the final rather cataclysmic fight.

As with the sequel to any story that takes a number of years’ after the main story, you can expect that the characters will change a bit. Harry, Ginny, Draco, Hermione, and Ron may not change overall (Harry still wants to fight the good fight, and Hermione is still determined to be the smartest witch in the room) they do grow up quite a bit. For example, you easily see the heartache that any parent goes through with children who are having a rough time of it in the actions of Harry, Ginny, and Draco. In fact, the transformation into a decent person that you began seeing Draco go through in The Half-Blood Prince and The Deathly Hallows is truly complete in this story. Specifically, when Draco is faced with the opportunity to force his son Scorpius to become something that he is not (namely Dark) or encourage him to do what is right, Draco whole heartedly encourages and supports him in his desire to be a part of the Light. Each of the children portrayed in this story, namely Albus, Scorpius, and Rose, are full characters in their own right. They are not portrayed as miniature caricatures, or shadows of their parents but rather individuals with their own quirks, foibles, and characteristics of their own. For example, early on in the play Rose is shown to have the intelligence of her mother Hermione, and yet the emotional depth of a teaspoon that her father has when she says to Albus after he is sorted into (gasp) Slytherin:

Albus? But this is wrong, Albus. This is not how it’s supposed to be.

As the story goes along, not only does Albus end up overcoming his fears and insecurities, but you also see other characters develop and improve. These characters are not simple two dimensional portrayals, but are fully fledged and developed characters that experience some rather harrowing adventures and grow because of them. 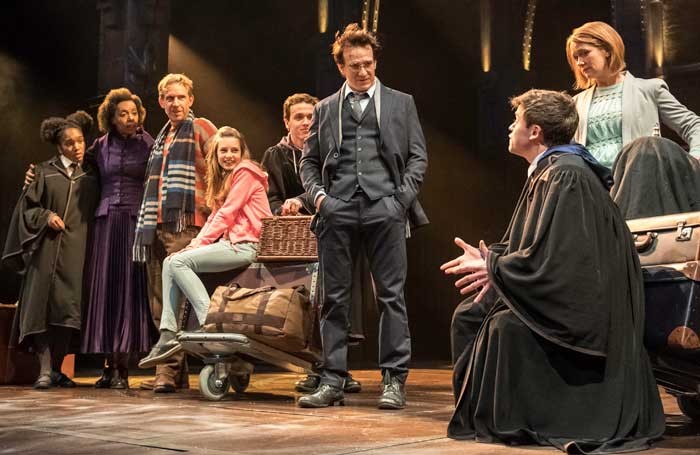 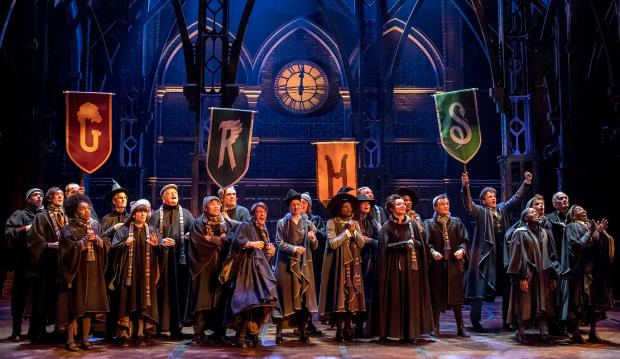 Harry Potter and the Cursed Child Part I & II is a true member of the Harry Potter franchise, and as such you feel like you are right at home with some good friends and family. As with any of the previous Harry Potter books or movies, you will find yourself rereading it, and revisiting the Wizarding World over and over. Not only does this latest chapter in the Harry Potter saga answer some many longstanding questions, it also raises a few new conundrums as well. Due to this, it can be easily seen that fans will be rereading the story just as often as they do all the previous ones. Trying to ferret out hidden meanings, and new clues as to what happens next.

Having been a long standing fan of the Harry Potter series, I started reading the story with excitement, though a purposely lowered sense of expectations. I was afraid that Harry Potter and the Cursed Child wouldn’t live up to the legacy of the other stories. However, this isn’t some side story or book, but an integral part of the overall Harry Potter series that you cannot miss out on. Harry Potter and the Cursed Child doesn’t just bridge between the first generation and the next, introduce the characters to and stories to a whole new generation that may not have been all that into it to begin with. Rather, what it does is take the stories to the next logical step, and actually leave you wanting more. In short, The Cursed Child is pure enjoyment and a must read. Oh, by the way…you didn’t actually expect us to reveal who the Cursed Child is, did you? Read the book, or see the play.