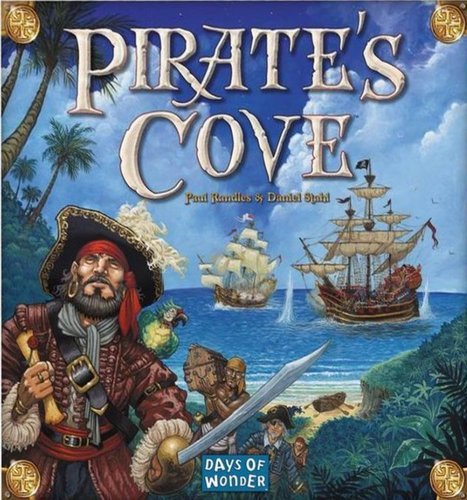 There’s a piece in all of us, a subtle wellspring of emotion that desires adventure.  Craving treasure, clashing swords, and booming cannons.  A part of each and every one of us that desires the rolling waves and salt spray of the open sea.  We all want to be pirates, regardless of our conscious ability to admit this.  We’ve all made one scallywag or another walk the plank in our incessant daydreaming.  If you were to sail the mighty oceans, what sort of trouble would you be up to?  What kinds of conquests could you call your own?  What stockpiles of glistening gold and gemstones hoarded away in your secret cave?  What level of infamy would you aspire to?  Why not answer these questions, and many more, by playing Pirate’s Cove, the board game by Days of Wonder?

In Pirate’s Cove, three to five players vie for fame and fortune amidst the islands and waters of the Caribbean.  Each player is the captain of their own ship, which can be upgraded throughout the game by expanding hull storage, adding more sails, or increasing the number of cannons and crewmen on board.  Six islands dot the landscape, offering varying amounts of Fame, Treasure, Gold and special items to obtain.  The primary objective in the game is to be the pirate with the highest amount of Fame collected by the end of twelve rounds, each round representing a month’s worth of time in-game.  Each “month” alters the rewards to be gained by visiting each individual island, making each session an individual experience.

Each turn, players decide privately which island they will visit this month, basing their decision off of their own needs and what each island happens to be offering.  When all players have locked in their decisions, they all reveal simultaneously and make their moves.  If two or more players arrive at the same island, they must either engage battle and determine a victor, or all but one must choose to flee.  The last remaining ship at the island reaps the bounty, any who are defeated or retreat are left empty-handed for the turn.  Resolution of all islands results in the upkeep phase of the turn, where gold can be spent on ship upgrades, items and so forth.  Then the island cards are flipped to signify moving into the next month of the game, and thus the obtainable bounty being offered at each.

Fame is the ultimate goal, but obtaining it oftentimes must come at the expense of other pursuits, and vice versa.  One player may strategize to obtain as much gold as possible, to make their ship overwhelmingly powerful, guaranteeing victories at every island they visit.  Another player may forego ship upgrades, choosing instead to speed to high-fame locations and rely on luck in avoiding enemy encounters.  Treasure can be buried at Treasure Island in exchange for mass amounts of fame, but requires the dangerous task of being hauled through enemy-infested waters, endangering the payoff every turn a player delays off-loading their stockpile.  There are numerous strategies and approaches to the game, offering a unique experience each time it is played.

For a simple and easy-to-learn game, Pirate’s Cove also offers a surprising amount of depth.  A special set of rules can be enforced involving the Legendary Pirate, a black ship that sails the islands looking to start trouble.  These enemy ships take the form of famous or mythical figures such as Blackbeard and the Queen Anne’s Revenge, or Davy Jones and the Flying Dutchman.  If encountered, the Legendary Pirate attacks all players on sight.  They can be very difficult to defeat, but rich in rewards.  The standard rules for the Legendary Pirate state that he sails to each location in a clockwise manner, but my time with the game revealed a more exciting outcome in randomizing his appearances via die rolls. 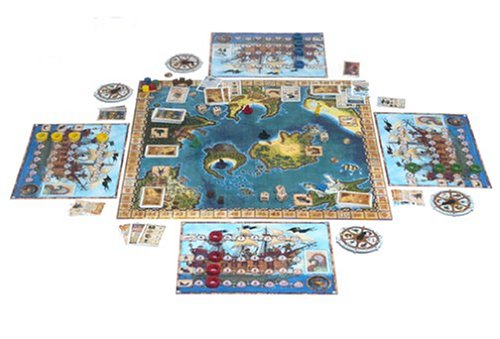 As a fan of the Golden Age of Piracy, I’ve always enjoyed the aesthetics of Pirate’s Cove.  The board is colorful, illustrating a bird’s eye view of the six islands, each unique in their design.  Green palm trees and light sand complement the roaring volcano of the titular Pirate’s Cove, the leering skull outcropping of Treasure Island, and the white stone fortress of Cannon Island.  The player pieces are colored plastic, solid and sculpted.  They are well-made, but not overly ornamental.  The various other game components such as item cards, player navigation wheels and ship status cards are all colorful and well-illustrated.  Overall, the game is a joy to look at and play with.

Of the few real weaknesses present in the game, the first I’d list would be the aforementioned standard rules for the Legendary Pirate.  It really is just better to roll a die and randomize his movement, rather than follow the standard clockwise-movement rule.  I’d also mention that the game is really best played with a full crew of five, and it becomes less engaging the fewer people you have onboard.  Getting this many people together can be a bit of a challenge, however.  Lastly, one little annoying complaint I have is the plainness of the Treasure pieces.  Considering the high production value of all other game components, it’s always bothered me that these little treasure chests are merely tiny brown wooden blocks without any detail or sculpting.

Board games can often be a dodgy undertaking.  Fifty to one-hundred dollar price tags, complex rule sets, pieces that can go missing, design flaws.  There are a fair number of pitfalls to be found in the board game hobby by nature.  I can attest that sinking some of your hard-earned cash into Pirate’s Cove will grant you many nights of riveting adventure.  It’s easy enough for kids to learn, complex enough for adults to enjoy, and a lot of fun for all parties involved.  Take the plunge into the briny depths already!  I give Pirate’s Cove a 9/10.