The world of Skyrim has many Daedric lords, one of which is Sheogorath Prince of Madness. As his name infers he is pretty crazy, and if you work for him you will get one of the strangest weapons in video game history. Just to put it in perspective it can shoot a fireball, thunderbolt, or ice spike. Howeve,r if it wants to it might also summon a Daedra, transform the enemy into a sweet roll, or replace them with a pile of cheese (just to name a few).

This staff is called the Wabbajack and if this particular kind of madness makes you want more you have come to the right place. First things first if you want it you need to start the quest named “The Mind of Madness” this can be started by first heading for Solitude. You need to find the guy named Dervenin wandering around in front of the blue palace and talk to him. When you are talking to him he says that he wants help getting his master to return and wants you to assist him. So far it doesn’t seem so strange…that is until he tells you that you need to get into the deserted wing of the palace and you need to be carrying Pelagius’s hip bone. 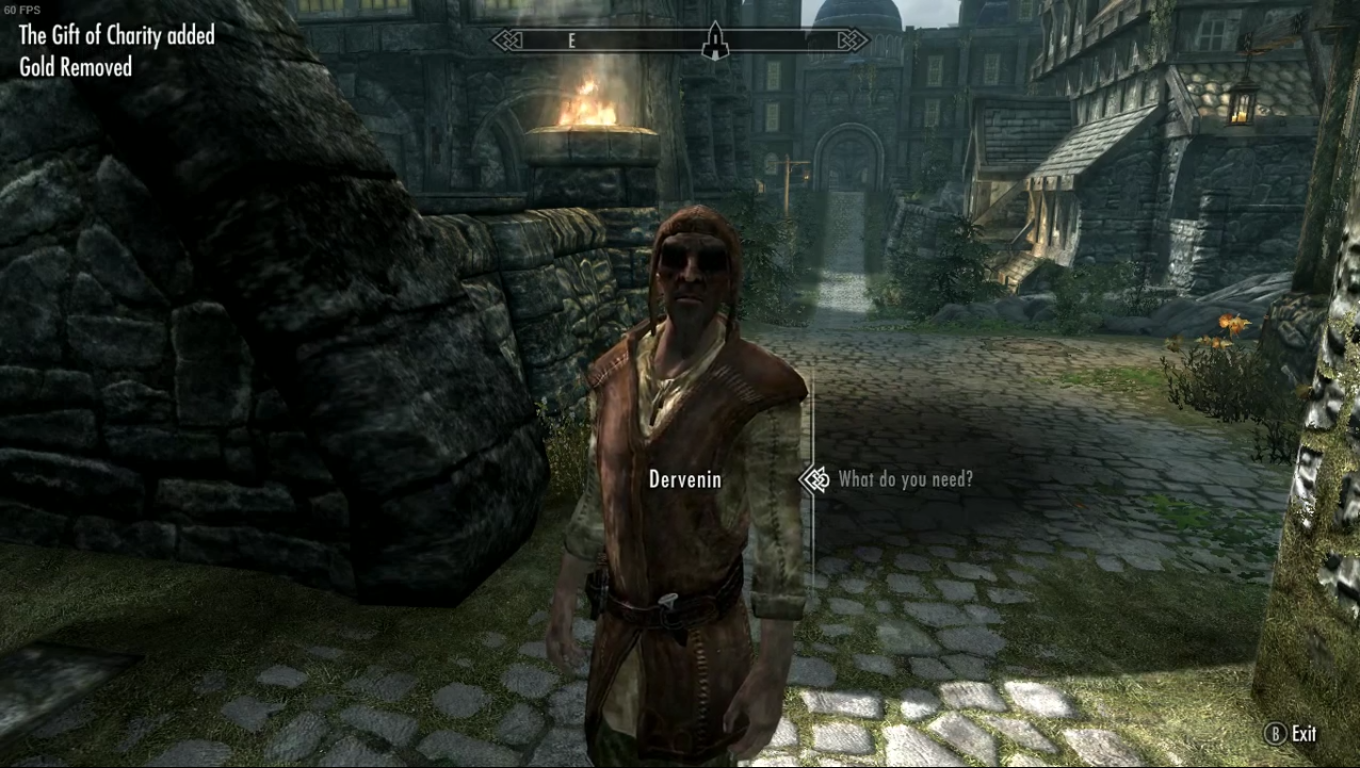 Should you choose to assist Dervenin (for some reason) and head into the blue palace, you will need to acquire a key in order to gain entry to the Pelagius Wing. In order to do so talk to one of the workers (such as Una pictured below) and request access. They will at first not let you but they are easy to convince, I mean, why not let a complete random stranger that is armored to the teeth roam freely in the palace?

Once you gain entry to the Pelagius Wing of the palace you will then need to walk upstairs and find the red rug (as pictured below) and try to walk across it. You will find yourself being transported into a strange garden area with a dining table set up and a couple of people talking. Talk to Sheogorath (the one that looks more crazy than the other) and you can now deliver the message that Dervenin  wanted you to deliver. Sheogorath will agree to return to his people, if you can find your way out first. He then gives you the strange staff known as the Wabbajack so that you can try to escape.

There are three different pathways leading out of the area and each of them lead to a puzzle. In order to escape you will need to solve three different puzzles. While the order you do them in does not matter, I will first be talking about the puzzle if you turn right. You will walk into an area and see a regular sized imperial soldier fighting a very small version of Pelagius representing his confidence. In order to solve this puzzle all you have to do is hit the imperial soldier with the staff and cause him to disappear, following that shoot Pelagius with the staff as well and he will grow. Once the Imperial soldier is gone two ghosts will show up, make sure that you kill both of them and then make Pelagius grow as large as possible. You are now finished with this area so you can move on.

Now for the area that was straight ahead, when you enter this area you will find a bed with Pelagius the Tormented sleeping. You need to wake him up, in order to do so shoot him with the staff. The first time you shoot him a wolf will appear, you need to shoot it and it will turn into a goat. You then need to shoot Pelagius again, and this time a bandit will show up. Once you shoot him he will turn into a little boy. Shoot Pelagius yet again, and this time it will summon a hagraven, upon shooting the hagraven it will turn into a girl. You only need to shoot Pelagius twice more, the first time will make a fire atronach and the second will make a dragon priest both will disappear upon being shot, and then Pelagius will finally wake up. You can now move onto the next puzzle.

The final area is an arena with two storm atronachs fighting, ignore them and shoot the guys in dwarvish armor on the other side of the arena, they will turn into wolves and you can move on and head back to Sheogorath. You can then tell him you fixed Pelagius’s mind and he will summon Dervenin to get the luggage so he can return to the Shivering Isles (a dlc in Oblivion where Sheogorath can be found). After that you can leave and get to keep the Wabbajack. (just make sure you change back into your armor before testing it on the guards of Solitude).