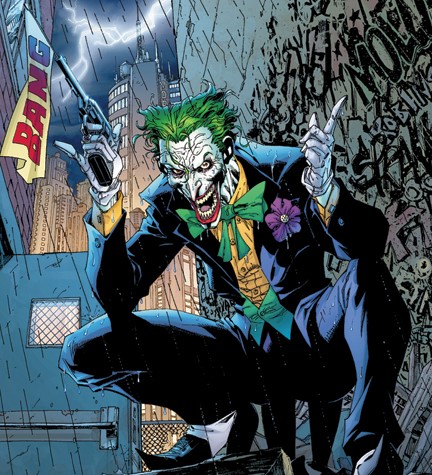 While the true origin of The Joker is shrouded in mystery even to himself, there are a few things that we do know concerning the clown prince of crime. His first name (Jack) is all that is mentioned in the comics. It’s revealed he had a wife who was pregnant who unfortunately passed away in an accident.

The Joker started off his criminal life as a petty criminal called the Red Hood wearing a tuxedo, bright red cape and the iconic full red hood. After robbing his employer of over one million dollars the red hood is persuaded by Batman to a chemical facility where in an attempt to escape from Batman falls into a vat of chemicals transforming his appearance into what we recognize the joker today.

A true agent of chaos the Joker is a twisted example of how far a person can go. He is feared in the DC universe for his brutality and unpredictability. Possessing no superhuman abilities, he is a master chemist capable of creating lethal toxins and concealing them in average household products. The Joker is the perfect opposite to Batman, being the unstoppable force to his immovable object. The Joker believes he makes Batman into a better Batman, and doesn’t care who Batman is behind his cowl stating, Batman is Batman even when is isn’t wearing his mask just like I am who I am with or without his face.