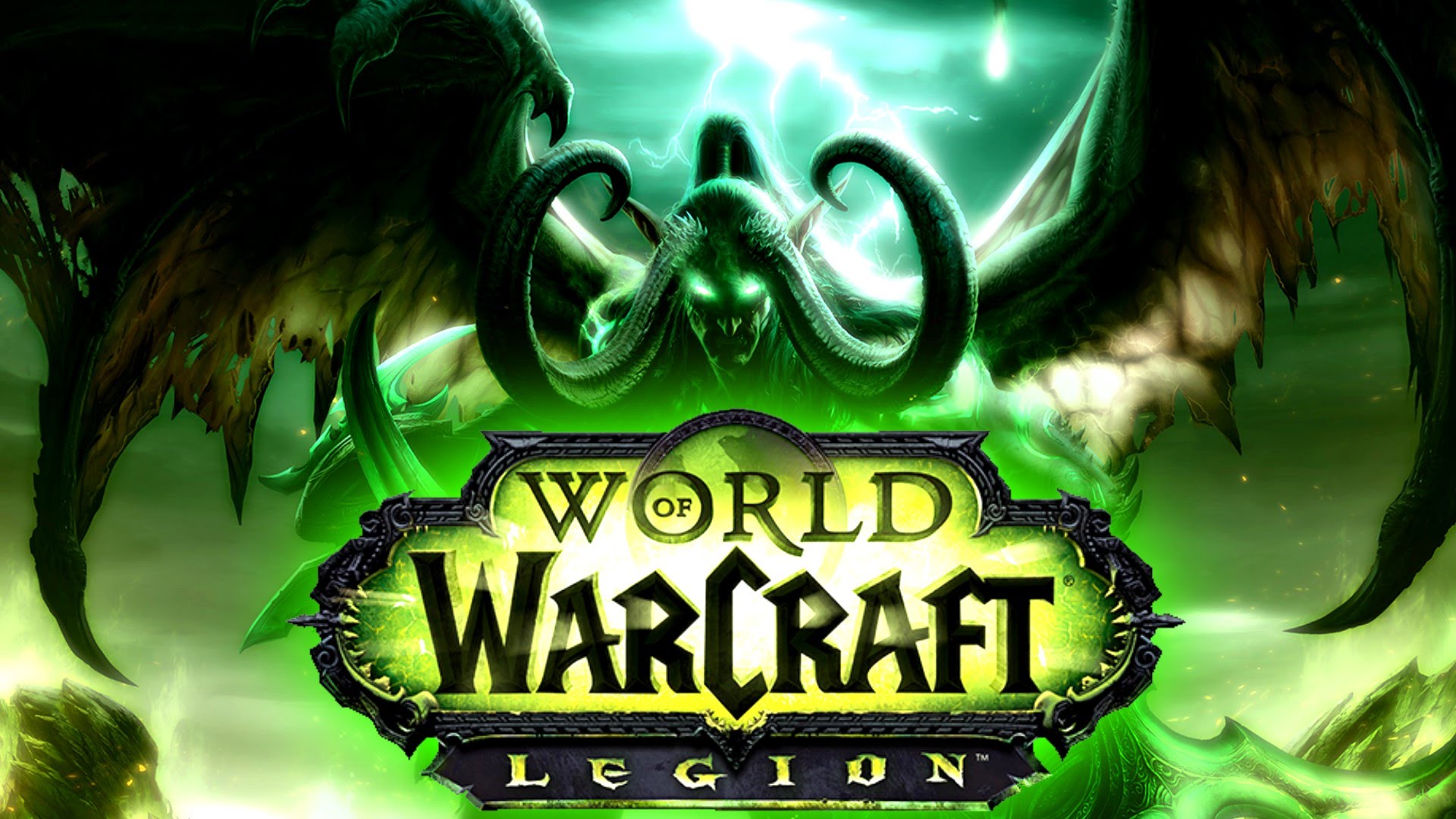 Legion is the 6th expansion that has been announced for MMORPG reigning champion World of Warcraft, while the game has seen better days in terms of subscriber count as well as overall reviews the announcement of Legion has heralded a possible return to form that originally caused the game to have such a massive success. Will it bring back the classic elements that inspired such a devoted following, or is it falsely clinging to nostalgia to save a game on its decline?

Before I go into some of my thoughts on my many hours exploring the Alpha build for Legion let me make a few notes on what I will be focusing on or ignoring in this First Look. Though I have played World of Warcraft for 10 years and have experienced every expansion, I am going to avoid comparing the experiences between them as I feel that is too often used as a way to devalue a game for the sake of what my opinion would be for the “Golden Days” of the game. This will also not be taking an in depth looking at lore as most of the lore is still not completely fleshed out, however I will be covering that in a later article after the expansion is released. Lastly, overall playstyles of the DPS, Healer, and Tank roles are being heavily tweaked still so I will not be commenting on the radical changes to them until they are much more concrete.

The moment I got invited to the Alpha I had a simple goal, play every spec of every class to make sure that I knew what to play come Legion’s release. This seemed like a simple task to me as the main part of this goal was which would be the most enjoyable to play, the problem was, almost every class I played had a unique and enjoyable style that really felt like it belonged in the class. This has been what the community has been referring to as “Class Fantasy”, or a core playstyle that feels akin to the class and specialization that it is a part of. Some of the changes to match these fantasies have been small, though others have been massive to really push this feeling. My favorite so far has been for Shadow Priests, their major change has been their former resource (mana) has been replaced with Insanity. Insanity is a resource gained from casting spells that when it is at its max can be consumed to give a massive increase in damage, this is also accompanied by your character sprouting tentacles of void energy to really show much you’ve lost your mind. This really compliments the idea of a class that is a priest similar to a cultist that really tries to channel the powers of these old gods and it is things like this that has really shown Class Fantasies to be a victory in my book. 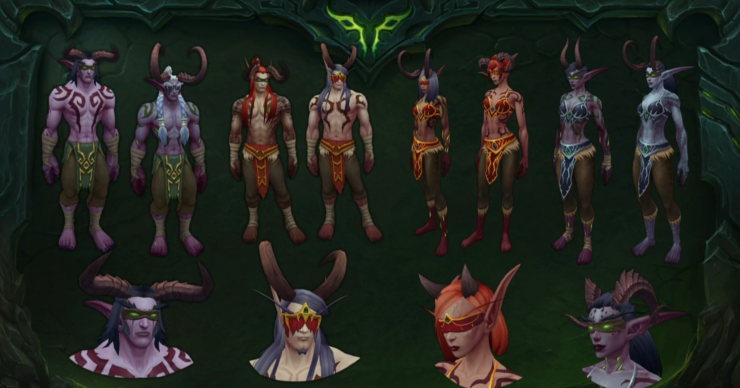 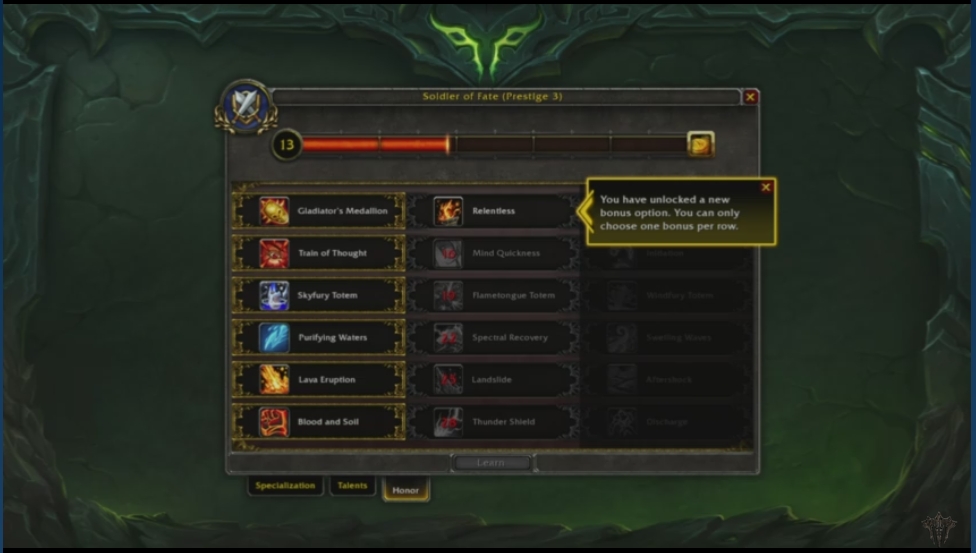 What else adds to these Class Fantasies you may ask? This expansion is going to be unique in the regard that at the beginning after the initial quest line that sets up the tone of the game, you will receive a quest to get an Artifact Weapon. These artifact weapons are specific to the specialization you are playing and will grow in power by upgrading through PVE, PVP, and Questing content. Because of this weapon drops will for the first time in WoW‘s history, not be a part of raid loot drops or purchasable for PVP or Arena. These weapons add to the Class Fantasy concept as they are very lore intensive weapons, some of these weapons have been known of since the earliest days of Warcraft such as the Ashbringer for Retribution Paladins, as well as Doomhammer for Enhancement Shamans. Others are brand new to the lore but have compelling stories and quest lines leading up to their acquisition. Accompanying these Artifact Weapons will be Class Order Halls, similar to the Garrisons from the previous expansion, Warlords of Draenor, they will be non-city hubs that will be centered around the class you play and will be in locations reflecting this such as an enslaved demon realm for Warlocks, and a mountain top hunting lodge for Hunters. My hope is that this will encourage comradery between players of each class as well as make it a fun environment unlike the solitude that having a personal Garrison inadvertently encouraged.

One of the major parts of any good expansion is new Questing areas for reaching the newly raised level cap. Over the years WoW has tried to avoid offering too linear of a questing experience that simply went from one area to the next with maybe one block that gave you a choice between two separate areas. While they’ve both progressed and regressed over different expansions with this concept, Legion is offering a massive overhaul of the questing system that offers a much more nonlinear approach. All questing areas (except for the max level specific area) will be available to choose from at launch and will scale with your level as you go through it, allowing you to quest through the Broken Isles in any order you would like. I am really looking forward to this as someone who adores leveling and has played through each zone of the game easily a dozen times, some areas are more tedious at times and you want to avoid them at first or get them quickly out of the way and this gives you that option to progress how you would like. 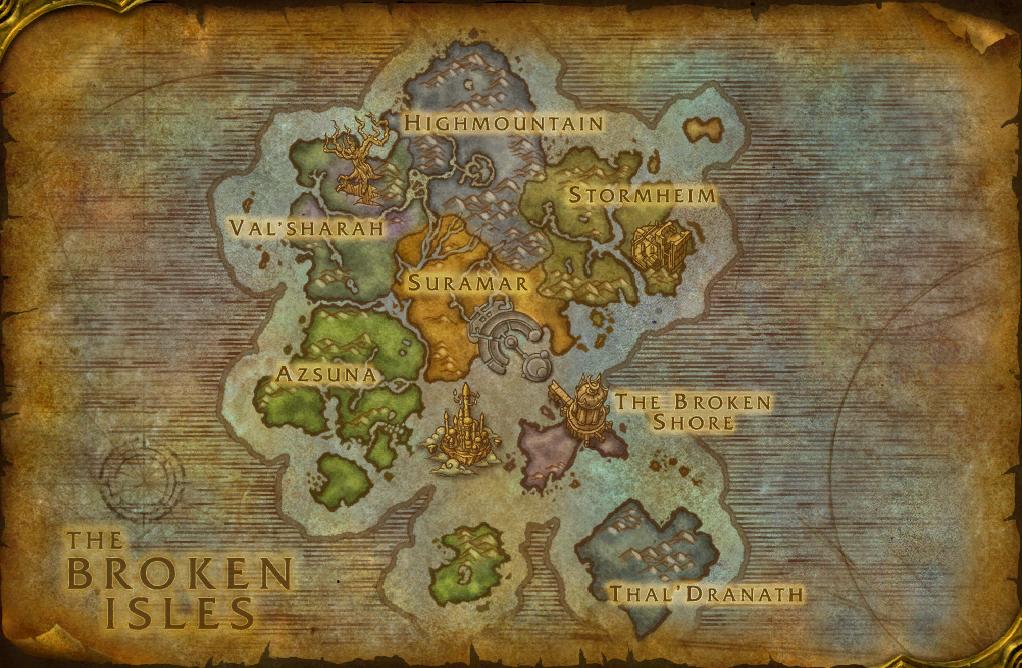 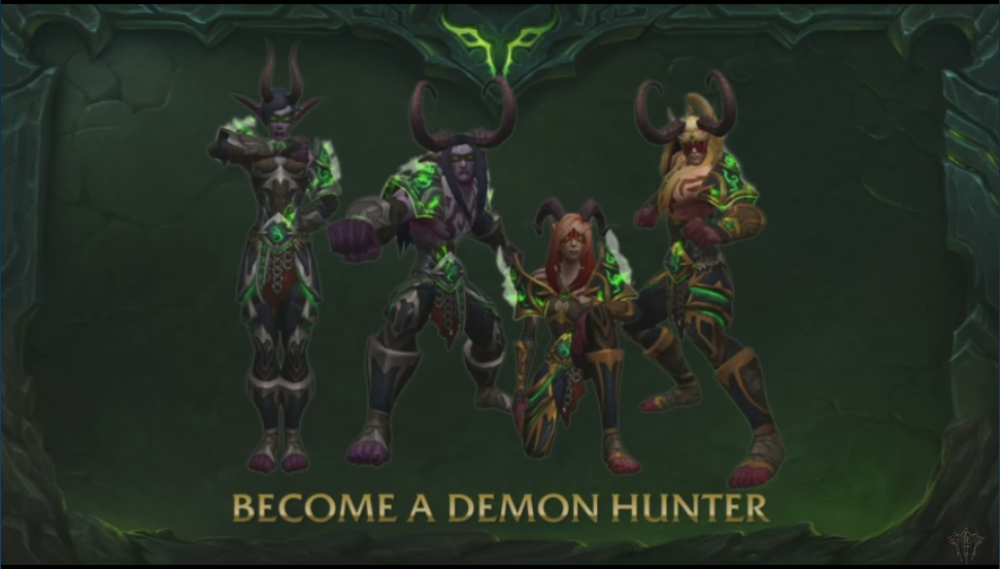 Of course one of the largest announcements was the addition of a new Hero Class, the Demon Hunter. These Demon Hunters are disciples of Illidan Stormrage, they use their warglaives as well as their demon power infused forms to quickly speed around the battlefield and overwhelm their opponents. They are leather wearing agile fighters that prefer dual wielding blades, they will start at level 98 but will make it to level 100 by the end of their initial questing hub and story line. There are some interesting things about the Demon Hunter that are very new to the game, firstly, Demon Hunters will only be available to two races, the Horde’s Blood Elves, and the Alliance’s Night Elves. These are the only races that would have been able to become Demon Hunters according to the lore. Secondly, due to the natural agility of the Demon Hunters as well as their demonic powers they will have the powers to double jump as well as glide safely to the ground with their demonic wings. Last, they are the only class that will have only two specialization choices, these will be Havoc for DPS, and Vengeance for Tanking.

The last thing I will be covering is PVP. Player vs Player is an integral part of World of Warcraft and it has always had a fair bit of balancing issues. This is due, in part, to some spells for classes seeming to only have PVE or PVP viability with talent tree choices usually having two PVE choices with a single PVP choice thrown in on each tier. However, this is all changing! A much welcome addition in Legion is the new PVP specific talent tree, this will look much like the current talent trees with three choices of talent per level bracket you reach (15, 30, 45, 60, etc.) but all options will be geared towards player vs player. This is huge because it adds much more flexibility and adaptability to both normal battlegrounds as well as arena to making sure you are properly countering your enemy’s composition. I’m hoping this fixes many balance problems that are currently present in PVP as well as make multiple builds and options viable. I am curious if they will be looking to do this for Artifact Weapons as well, as it seems that though they have been going with more general upgrades for the Artifact Weapons such as flat damage increases for abilities or cooldown reductions, I think there could be room to add some cool PVP specific abilities in for each Artifact weapon that could even further help in making it a very unique experience as well as possibly furthering the Class Fantasy concept in PVP. 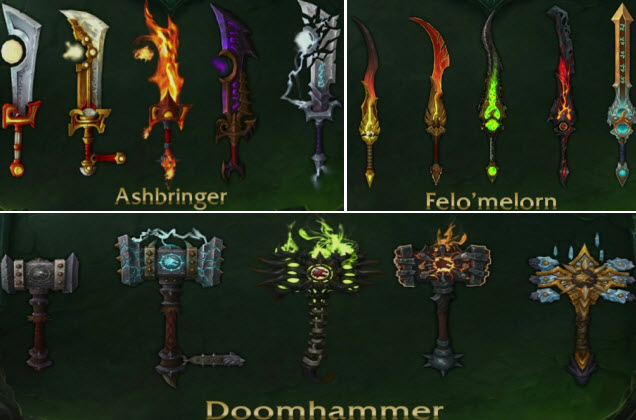 All in all, I am very excited that Blizzard is taking such a brave and wildly different approach to Legion and it is the first expansion I have been this excited for since Cataclysm. If they keep pushing these ideas and really looking to balance these large scale changes with small quality of life ones, I really think Legion could be the resurgence World of Warcraft is needing. Though it is currently the Alpha and there is still a lot to be done before its August 30th release date, I highly recommend checking out both the current Alpha build as well as looking into getting the game at release and seeing how much the game has changed for the better. That’s all for now, I will be back with more as the updates come in and the game is released. Followed by a look and analysis of where the story will be going with the Horde and Alliance, the Burning Legion, and of course Illidan Stormrage. Stay tuned for more! 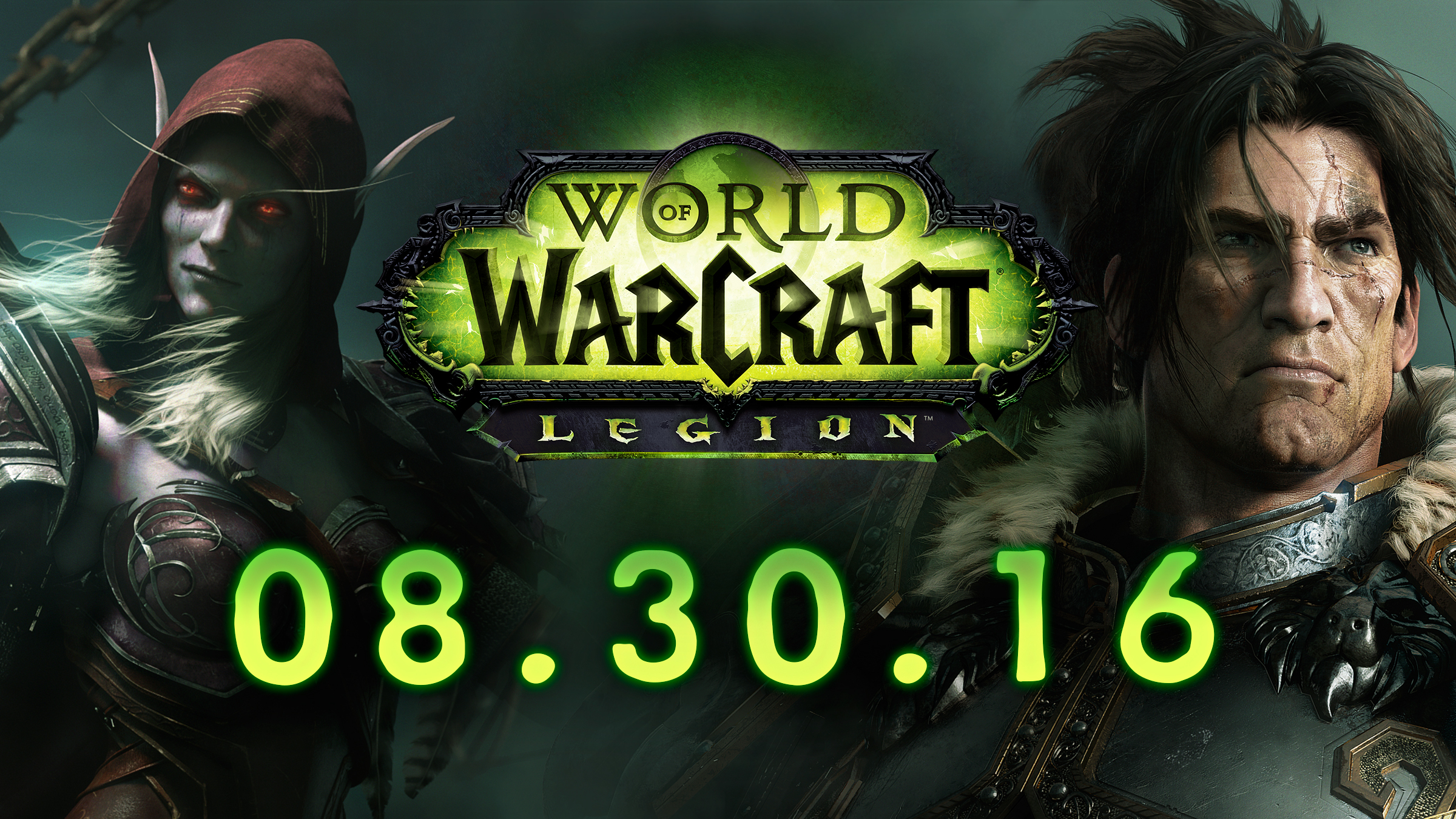